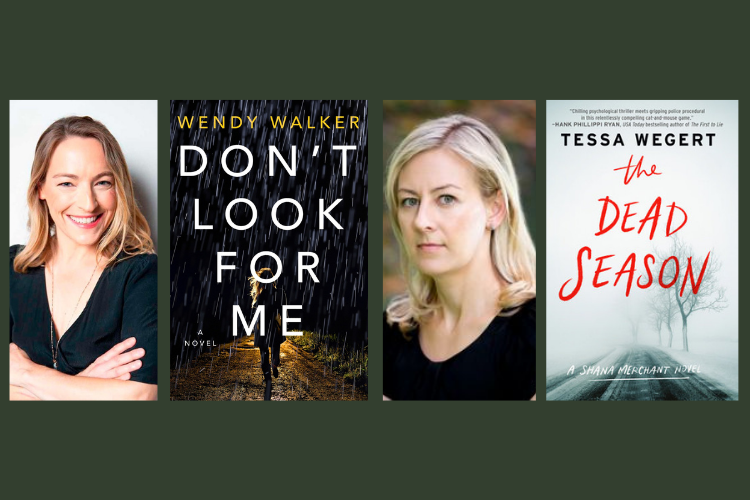 We are thrilled, along with Darien Library, to welcome Darien's own Tessa Wegert for a conversation about her new book The Dead Season. Novelist Wendy Walker whose new book, Don't Look For Me was published this fall will join Tessa for this event.

Tessa Wegert is a Canadian expat, journalist, and former digital media strategist. Her business and marketing articles have appeared in such publications as Forbes, The Huffington Post, Adweek, and The Economist. She attended Concordia University in Montreal, where she studied Communications.

The Dead Season is Tessa's second novel, her first (Death in the Family) was published in February 2020.

Wendy Walker is the author of the psychological suspense novels All Is Not Forgotten, Emma In the Night, The Night Before and Don’t Look For Me. Her novels have been translated into 23 foreign languages and topped bestseller lists both nationally and abroad. They have been selected by the Reese Witherspoon Book Club, The Today Show and The Book of the Month Club, and have been optioned for both television and film.

Wendy holds degrees from Brown University and Georgetown Law School, and has worked in finance and several areas of the law. As a former family law attorney with training in child advocacy, Wendy draws from her knowledge of trauma and psychology to write compelling and complex characters and stories.

ABOUT THE DEAD SEASON

Senior Investigator Shana Merchant has spent years running from her past. But she never imagined a murder case would drive her to the most dangerous place of all—home.

After leaving the NYPD following her abduction by serial killer Blake Bram, Shana Merchant hoped for a fresh start in the Thousand Islands of Upstate New York. Her former tormentor has other plans. Shana and Bram share more than just a hometown, and he won’t let her forget it. When the decades-old skeleton of Shana’s estranged uncle is uncovered, Bram issues a challenge: Return home to Vermont and solve the cold case, or the blood he spills next will be on her hands.

As Shana interviews members of her family and the community, mining for secrets that could help her solve her uncle’s murder, she begins to realize how little she remembers of her childhood. And when Bram grows impatient and kidnaps again, leaving a trail of clues Shana alone can understand, she knows his new victim will only survive if she wins the psychopath’s twisted game. In order to solve one mystery, Shana must wade into her murky past to unravel another.

ABOUT DON'T LOOK FOR ME

They called it a “walk away.” The car abandoned miles from home. The note found at a nearby hotel. The shattered family. It happens all the time. Women disappear, desperate to start over. But what really happened to Molly Clarke?

When a new lead comes in two weeks after the search has ended, Molly’s daughter, Nicole, begins to wonder. In spite of their strained relationship and the tragedy that rocked their world, nothing about her mother’s disappearance makes sense.

Against her father’s wishes, Nicole returns to the small, desolate town where her mother was last seen, determined to find the truth. The locals are sympathetic and eager to help. The innkeeper. The bartender. Even the police. Until secrets begin to reveal themselves. When Nicole learns about another woman who vanished from town, then discovers a small hole cut into a fence guarding a mysterious, secluded property, she comes closer to the truth about that night—and the danger surrounding her.

The night Molly disappeared began with a storm, running out of gas, and a man in a truck offering her a ride to town. With him is a little girl who reminds her of the daughter she lost years ago. It feels like a sign. It feels safe. And Molly is overcome with the desire to be home, with her family—no matter how broken it is. She accepts the ride. But when the doors lock shut, Molly begins to suspect she has made a terrible mistake.

Don't Look for Me: A Novel (Hardcover)