Steven Raichlen: How to Grill Vegetables 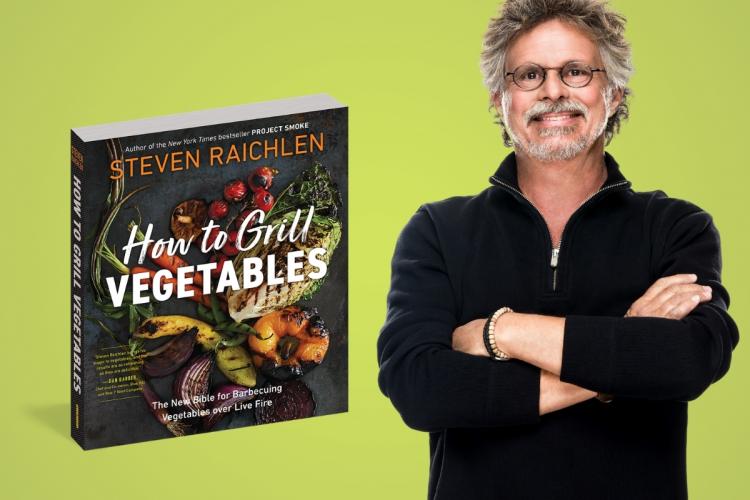 It’s hard to believe there was a time when grilling and barbecue weren’t ubiquitous American obsessions. Enter Steven Raichlen, whose The Barbecue! Bible—the IACP Award–winning homage to live-fire cooking first published in 1998—launched a revolution in American grilling. The renowned barbecue authority has written more than 30 books, including the New York Times–bestselling Project Smoke and Planet Barbecue and the multimillion-copy How to Grill. Raichlen’s books have won 5 James Beard Awards and 3 IACP Awards, and have been translated into 17 languages. And now comes How to Grill Vegetables, a stunning collection of recipes and techniques for grilling a wide array of vegetable-forward dishes. Barrett Bookstore is delighted to partner with Darien Library to bring you this event.

Register for this Author Talk

About How to Grill Vegetables

Wood-grilled bruschetta with fire-blistered tomatoes and ricotta. Smoked guacamole. Ember-roasted sweet potatoes. Grilled banana pudding. When one thinks of live-fire cooking, vegetables are often not top of mind. But they should be. Marrying the art of grilling with the versatility of gorgeous seasonal produce and big flavor, “master griller” -Esquire

Steven Raichlen’s How to Grill Vegetables: The New Bible for Barbecuing Vegetables over Live Fire demystifies the world of grilling green. Showing exactly how to smoke-roast a head of cauliflower—plus char a winter squash, ember-roast green beans, hay-smoke lettuce, plank-grill Eggplant Parmigiana, and rotisserie brussels sprouts on the stalk—there are over 125 mouthwatering recipes and creative grilling techniques that put vegetables front and center. From a Smoke-Roasted German-Style Potato Salad to a Grilled Wedge Salad with Smoky Ranch Dressing, from Elote Quesadillas with Grilled Corn, Poblanos, and Pepper Jack Cheese to Nashville Hot Cauliflower, from Grilled Vegetable Paella to Ember-Grilled Barbecued Onions, a Double-Grilled Summer Vegetable Frittata and Hasselback Apples Grilled on Cedar Planks, every recipe is indulgent and boldly flavored, in classic Raichlen style. And while not every dish is meatless, meat and seafood are used only to enhance flavors of the vegetable, not overshadow it.

A celebration of all the ways to grill green from the James Beard Award-winning author of an impressive array of New York Times bestselling cookbooks, a Barbecue Hall of Famer, and Public Television star, How to Grill Vegetables delivers recipes for everything from starters to sides to desserts alongside a complete step-by-step handbook to mastering the techniques of grilling vegetables.

An international TV personality, Steven Raichlen hosts the popular Project Fire, Project Smoke, Primal Grill, and Barbecue University shows on public television and Le Maître du Grill and Les Incontournables de BBQ on the French Canadian food network Zeste. His latest venture is Project Fire, Season 3. Raichlen founded and runs Barbecue University at the Montage Palmetto Bluff in South Carolina and has lectured on the history of barbecue at the Smithsonian Institution, Library of Congress, and Harvard, among many other institutions. In 2016, he was inducted into the Barbecue Hall of Fame.

Steven Raichlen’s research has taken him to more than 60 countries on 6 continents to document how people grill in different cultures. An award-winning journalist, Raichlen has written for the New York Times, the Wall Street Journal, Esquire, GQ, and all the major food magazines. He ushered in the modern age of live-fire cooking, and his work has birthed a generation of writers, restaurants, and grilling enthusiasts.

Raichlen received a Watson Foundation Fellowship to study medieval cooking in Europe, as well as a Fulbright to study comparative literature. He holds a degree in French literature from Reed College and trained at Le Cordon Bleu and La Varenne cooking schools in Paris. He and his wife divide their time between Miami, Florida, and Martha’s Vineyard, Massachusetts. You can visit him online at barbecuebible.com

This event will take place on Zoom. You will receive an email confirming your registration with a link to join the Webinar after you register for the event.