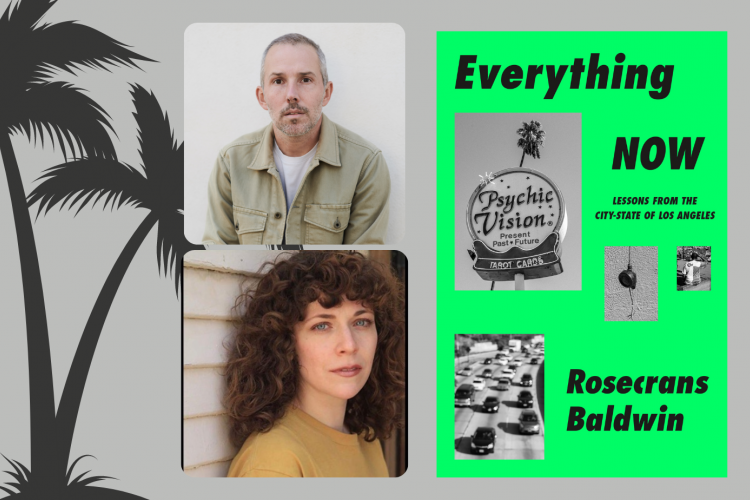 Please join Barrett Bookstore and Farrar, Straus & Giroux for an engaging conversation with author Rosecrans Baldwin and actress Jen Tullock. Baldwin and Tullock will discuss Baldwin's new book, Everything Now which is avaliable for purchase at the link below or in-store at Barrett Bookstore.

This converstion will take place on @FSGBooks’ Instagram Live on Monday, June 28 at 6PM (ET).

Rosecrans Baldwin is the author of The Last Kid Left, You Lost Me There, and Paris, I Love You but You're Bringing Me Down. He is a frequent contributor to GQ, and co-founded the online zine The Morning News. He lives in Los Angeles.

Jen Tullock is an actor and writer best known for starring in and co-writing Sundance dramedy Before You Know It, which stars Tullock alongside Alec Baldwin, Judith Light, Mandy Patinkin, andco-writer Hannah Pearl Utt. A Sundance Screenwriting Labs alum, her writing has been featured in HuffPo Queer Voices and originals for Funny or Die and Super Deluxe. She is an award-winning audiobook narrator and creator of the satirical video project Eggshell. TV/Film credits include Curb Your Enthusiasm, Bless This Mess, Casual, and Netflix original 6 Balloons. In 2021, she will star alongside Patricia Arquette and Adam Scott in the Apple TV+ drama Severance, directed and produced by Ben Stiller.

A provocative, exhilaratingly new understanding of the United States’ most confounding metropolis―not just a great city, but a full-blown modern city-state

America is obsessed with Los Angeles. And America has been thinking about Los Angeles all wrong, for decades, on repeat. Los Angeles is not just the place where the American dream hits the Pacific. (It has its own dreams.) Not just the vanishing point of America’s western drive. (It has its own compass.) Functionally, aesthetically, mythologically, even technologically, an independent territory, defined less by distinct borders than by an aura of autonomy and a sense of unfurling destiny―this is the city-state of Los Angeles.

Deeply reported and researched, provocatively argued, and eloquently written, Rosecrans Baldwin's Everything Now approaches the metropolis from unexpected angles, nimbly interleaving his own voice with a chorus of others, from canonical L.A. literature to everyday citizens. Here, Octavia E. Butler and Joan Didion are in conversation with activists and astronauts, vampires and veterans. Baldwin records the stories of countless Angelenos, discovering people both upended and reborn: by disasters natural and economic, following gospels of wealth or self-help or personal destiny. The result is a story of a kaleidoscopic, vibrant nation unto itself―vastly more than its many, many parts.

Baldwin’s concept of the city-state allows us, finally, to grasp a place―Los Angeles―whose idiosyncrasies both magnify those of America, and are so fully its own. Here, space and time don’t quite work the same as they do elsewhere, and contradictions are as stark as southern California’s natural environment. Perhaps no better place exists to watch the United States’s past, and its possible futures, play themselves out.

“Baldwin offers an amalgam of voices in the form of stories, conversations, and reflections that add up to a spectacular collage portrait of Los Angeles. The result is a daring and innovative excavation of the City of Angels as “the Great American City-State.”

“[Everything Now] manages to define, and, perhaps, redefine, the most undefinable of cities with a fresh and sometimes startling inquisitiveness. Ambitious in a way that seems to mirror L.A.’s sprawl . . . Baldwin peels back the faded myths of stereotypes and boosterism in his effort to source the origins of L.A.’s power.”

“Like many of his creative peers, he’s not a native Angeleno, but as an accomplished essayist and writer of fiction, Baldwin’s outsider status gives him a perfect vantage point to challenge, embrace or confront what it means to live in LA in the 21st century. . . LA is presented as a place that challenges preconceptions, an endless horizon of possibilities where you’re meant to make your own narrative and find your own self, in amongst a crowd of others seeking to do exactly the same thing. [Everything Now] sub-divides the urban experience into personal vignettes, filtered through the city’s copious literature and the many voices Baldwin meets on his quest to understand LA. It’s a book about planning as much as people, and why LA is so utterly resistant to the latter whilst also being such a neophiliac’s paradise.”

“Full of surprising facts and anecdotes, this is a compelling, thoroughly researched, and lovingly crafted chronicle of how Los Angeles came to be.”

“A witty and imaginative survey of contemporary L.A. . . . This multifaceted, openhearted account reveals L.A. as a 'shifting mosaic of human potential' unlike any other place in the world.”

“Rosecrans Baldwin has created a sharp, convincing work of acute observation. It is as clearheaded and nuanced as it is timely.”

“With Everything Now, Rosecrans Baldwin maps the superstates of Los Angeles, capturing an immense urban world in all its shifts. Against backdrops of floods and wildfires, loneliness and delight, Baldwin has constructed his own brilliant scenography, a book as lively as the city it describes.”

―Geoff Manaugh, author of A Burglar’s Guide to the City

"In brisk and graceful style Rosecrans Baldwin has produced a new and necessary guidebook for contemporary Los Angeles, one that captures the elusive and bewildering qualities of the beautiful sprawling nightmare so many of us call home. Everything Now should be handed out to everyone who gets off a plane at LAX. "

―Jim Gavin, author of Middle Men and creator of Lodge 49

“Los Angeles invites extreme forms of correspondence, love letters and hate mail, and Rosecrans Baldwin’s Everything Now is a lush amalgam of both. In beautiful and concise prose, he maps a sun-drenched geography that we love to hate and hate to love. With this book, Baldwin cements his status as one of California’s finest literary cartographers.”

“All the research, all the thinking and wandering and interviewing that Baldwin did to get head and heart, arms and eyes around greater Los Angeles sits barely beyond the sightlines of the beautiful storytelling, the unpacking of myth and memory, the narrative wrestling match with a place that has crushed so many other would-be interpreters. Rosecrans Baldwin tackles a city-state’s sprawling past and present across great chunks of chronology and culture, and does it with grace and imagination. This book is a revelation.”

―William Deverell, Director, Huntington-USC Institute on California and the West

"With a novelist's eye and a searching curiosity, Rosecrans Baldwin has created a sprawling work that explores a place and its people, as well as culture, history, geography and ecology. A feat of imagination that fed my mind, heart and soul."

"Rosecrans Baldwin’s Everything Now is the rare work that understands L.A. for its Sphinx-like inscrutability and complex history. It refuses to lapse into cheap stereotype or inherited cliché, yet remains skeptical of the cultish lure and sunbaked weirdness. This is the meticulously reported and three-dimensional contemporary history that the city needs."

“I was born in Los Angeles and intend to die here―there’s no place in the world I love more. I'm also constantly furious about the many ways it falls short of its promise. Rosecrans Baldwin has taken on the unwieldy task of portraying this unique, enormous city in all its overlapping, contradictory layers, and incredibly, he succeeds. With vivid stories and a ready knowledge of local literature and history, he captures the sunshine and noir of 21st Century L.A.: both the multitudinous roar of life and the untenable, unconscionable inequality.”

―Steph Cha, winner of the Los Angeles Times Book Prize for Your House Will Pay

Everything Now: Lessons from the City-State of Los Angeles (Hardcover)