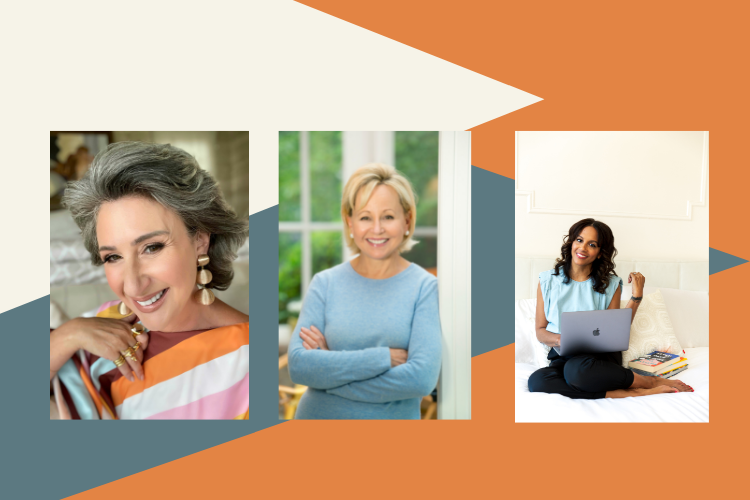 Please join Barrett Bookstore for a festive mid-summer event with some of the hottest fiction authors around! Jane Green, Deborah Royce, and Tia Williams will join us for a fun-filled evening featuring conversation, music, festive summer drinks, and book recommendations galore.

Jane Green is the author of twenty-one novels, including eighteen New York Times bestsellers, one cookbook, and various short stories.

She is published in over 25 languages, and has over ten million books in print worldwide.

Jane has been part of the ABC News team covering royal weddings, has had her own radio show on BBC Radio London, and has made regular appearances on TV and radio.

She contributes to a number of newspapers and magazines, and is a graduate of the International Culinary Institute in New York. Green is an avid cook, amateur decorator, and passionate gardener. She is also a regular storyteller for The Moth. Her first story for The Moth, Greener Grass, was video taped and subsequently went viral on Facebook, with over three million views.

A resident of Westport, Connecticut, she lives there with her husband and a small menagerie of animals. Her children swear they have flown the nest, but she’s not sure she believes them. In her next life she wants to come back as Elin Hilderbrand.

In her first novel inspired by a true story, Jane Green re-imagines the life of troubled icon Talitha Getty in this transporting story from a forgotten chapter of the Swinging '60s

From afar Talitha's life seemed perfect. In her twenties, and already a famous model and actress, she moved from London to a palace in Marrakesh, with her husband Paul Getty, the famous oil heir. There she presided over a swirling ex-pat scene filled with music, art, free love and a counterculture taking root across the world.

When Claire arrives in London from her small town, she never expects to cross paths with a woman as magnetic as Talitha Getty. Yearning for the adventure and independence, she's swept off to Marrakesh, where the two become kindred spirits. But beneath Talitha's glamourous facade lurks a darkness few can understand. As their friendship blossoms and the two grow closer, the realities of Talitha's precarious existence set off a chain of dangerous events that could alter Claire's life forever.

Deborah graduated Summa Cum Laude from Lake Erie College in 1980 with a BA in modern foreign languages (French and Italian) and a minor in dance. In 2008, she received an Honorary Doctorate of Humane Letters from the same institution. Deborah was an actress in film and television for ten years. Her big break came with the leading role of Silver Kane, sister of the legendary Erica Kane, on the long running ABC soap opera, All My Children. Deborah went on to star in feature films such as Remote Control, April Fool's Day, and Just One of the Guys, television movies such as Return to Peyton Place, The Deliberate Stranger with Mark Harmon, and Liberace, and television series such as St. Elsewhere, Beverly Hills 90210, and 21 Jump Street.

After the birth of her daughters, Deborah moved to Paris in 1992 and worked as a reader for Le Studio Canal Plus. On her return to the US, she transitioned to Miramax Films as their story editor. At Miramax, she worked on the development of such films as Emma, The Englishman Who Went Up a Hill But Came Down a Mountain, Walking and Talking by Nicole Holofcener, and early versions of Chicago and A Wrinkle in Time. With writing partner, Mitch Giannunzio, she won a grant from the Massachusetts Arts Council in 2002 to develop and workshop their original screenplay, Susan Taft Has Run Amok.

In 2004, Deborah and her husband, Chuck Royce (small cap investment pioneer), restored and reopened the Avon Theatre Film Center, a 1939 landmark in Stamford, CT. The not-for-profit Avon is dedicated to independent, classic, foreign, and documentary films, and hosts an ongoing series of visiting film luminaries. Directors and writers such as Robert Altman, Peter Bogdonavich and Nora Ephron, and actors such as Jane Fonda, Chloe Sevigny, Emma Roberts, and Richard Gere, have all come to the Avon to show their films and talk about their work. The late Gene Wilder, who frequently appeared at the Avon, was an early and avid encourager of Deborah’s writing.

Deborah and Chuck have restored several hotels (Ocean House—one of only 13 triple Forbes five-star properties in the world—the Weekapaug Inn, and the Deer Mountain Inn), a bookstore (The Savoy in Westerly, RI), and have completed numerous Main Streetrevitalization projects in Tannersville, New York and Westerly, Rhode Island. They are currently about to break ground on the renovation of the United Theatre arts complex in Westerly.

She and her husband have a tribe of children, stepchildren, grandchildren, and animals.

Like the chilling psychological thriller, The Silent Patient, Deborah Goodrich Royce’s Ruby Falls is a nail-biting tale of a fragile young actress, the new husband she barely knows, and her growing suspicion that the secrets he harbors may eclipse her own.

When a little girl is abandoned by her father in a cave, can she grow up to be healthy and whole? Eleanor Russell is an actress at the top of her game when scars from a childhood wound begin to unravel the threads of her life. Fired from her show, she bolts to Europe and marries Orlando Montague, a man she has only just met.

Back in Los Angeles, desperate to create the perfect life—new husband, new house, and a starring role in a Hitchcock movie remake—Eleanor believes it is all coming together. But her stability is threatened when Orlando reveals a sinister side, secrets from the past are unearthed, and the specter of the cave becomes unavoidable.

According to NBC News, Tia Williams “is a writer’s writer with a fashionista twist.” In 1997, the University of Virginia grad embarked on a career as a magazine beauty editor, working her way up the mastheads of YM, Elle, Glamour, Lucky, Teen People, and Essence. In 2004, she pioneered the beauty blog industry with her long-running, award-winning site, Shake Your Beauty.

The same year, her debut novel, The Accidental Diva hit shelves – and received glowing coverage in Marie Claire, Cosmopolitan, Allure, and The New York Times. She went on to co-write Iman’s makeup memoir, The Beauty of Color, and penned two young adult novels, It Chicks and Sixteen Candles.

In 2016, her novel, The Perfect Find, won the African American Literary Award for Best Fiction – and garnered rave reviews in The Washington Post, Essence, Cosmopolitan, People, Ebony and InStyle. Gabrielle Union is set to star in the film adaption for Netflix.

ABOUT SEVEN DAYS IN JUNE

Seven days to fall in love, fifteen years to forget, and seven days to get it all back again…

Tia Williams’ Seven Days in June follows writer Eva Mercy, a single mom juggling her tornado of a tween, her career as a “vampire erotica” author, and a secret personal battle. When reclusive, superstar novelist Shane Hall unexpectedly returns fifteen years after their torrid romance, she’s faced with another conundrum: What if the one who got away, came back? In just one week, her life gets (deliciously) turned upside down – raising the eyebrows of New York’s Black literati, and unearthing both of their explosive, buried pasts.

With its keen observations of creative life in America today, as well as the joys and complications of being a mother and a daughter, Seven Days in June is a hilarious, romantic, and sexy-as-hell story of two writers discovering their second chance at love.