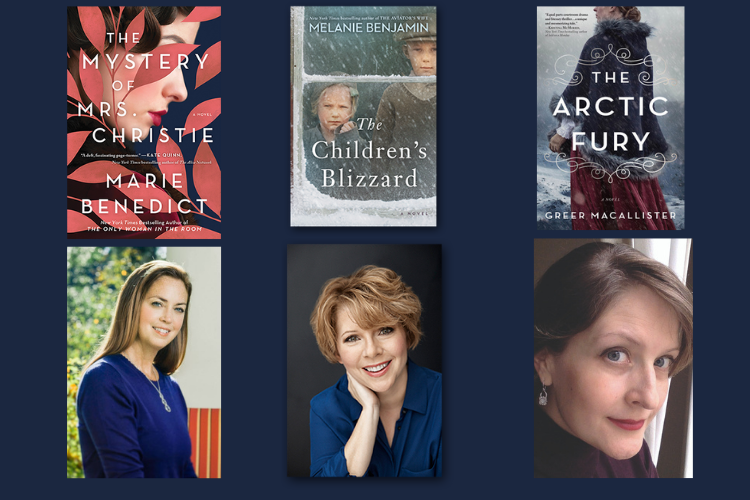 Please join Barrett Bookstore and Darien Library as we welcome authors, Marie Benedict, Melanie Benjamin, and Greer Macallister for a historical fiction panel. This will be a virtual event.

About the Author: Marie Benedict

Marie Benedict is a lawyer with more than ten years' experience as a litigator at two of the country's premier law firms, who found her calling unearthing the hidden historical stories of women.

Her new novel, The Mystery of Mrs. Christie, will be published in January of 2021, and her first co-written book, The Personal Librarian, with the talented Victoria Christopher Murray, will be released in June of 2021. Writing as Heather Terrell, Marie also published the historical novels The Chrysalis, The Map Thief, and Brigid of Kildare.

About The Mystery of Mrs. Christie

In December 1926, Agatha Christie goes missing. Investigators find her empty car on the edge of a deep, gloomy pond, the only clues some tire tracks nearby and a fur coat left in the car — strange for a frigid night. Her World War I veteran husband and her daughter have no knowledge of her whereabouts, and England unleashes an unprecedented manhunt to find the up-and-coming mystery author. Eleven days later, she reappears, just as mysteriously as she disappeared, claiming amnesia and providing no explanations for her time away.

The puzzle of those missing eleven days has persisted. With her trademark historical fiction exploration into the shadows of the past, acclaimed author Marie Benedict brings us into the world of Agatha Christie, imagining why such a brilliant woman would find herself at the center of such murky historical mysteries.

What is real, and what is mystery? What role did her unfaithful husband play, and what was he not telling investigators?

About the Author: Melanie Benjamin

Melanie Benjamin is a New York Times bestselling author whose books include The Mistress of the Ritz, The Girls in the Picture, The Swans of Fifth Avenue, The Aviator’s Wife_, The Autobiography of Mrs. Tom Thumb, and Alice I Have Been. Benjamin lives in Williamsburg, Virginia, where she is at work on her next historical novel.

About The Children’s Blizzard

The morning of January 12, 1888, was unusually mild, following a punishing cold spell. It was warm enough for the homesteaders of the Dakota territory to venture out again, and for their children to return to school without their heavy coats—leaving them unprepared when disaster struck. At just the hour when most prairie schools were letting out for the day, a terrifying, fast-moving blizzard blew in without warning. Schoolteachers as young as sixteen were suddenly faced with life and death decisions: keep the children inside, to risk freezing to death when fuel ran out, or send them home, praying they wouldn't get lost in the storm?

Based on actual oral histories of survivors, this gripping novel follows the stories of Raina and Gerda Olsen, two sisters, both schoolteachers—one who becomes a hero of the storm, and one who finds herself ostracized in the aftermath. It's also the story of Anette Pedersen, a servant girl whose miraculous survival serves as a turning point in her life and touches the heart of Gavin Woodson, a newspaperman seeking redemption. It was Woodson and others like him who wrote the embellished news stories that lured Northern European immigrants across the sea to settle a pitiless land. Boosters needed them to settle territories into states, and they didn't care what lies they told these families to get them there—or whose land it originally was.

About the Author: Greer Macallister

Raised in the Midwest, Greer Macallister is a poet, short story writer, playwright, and novelist whose work has appeared in publications such as The North American Review, The Missouri Review, and The Messenger. She is also the author of Girl in Disguise, The Magician’s Lie, Woman 99, and The Arctic Fury. She lives with her family on the East Coast.

About The Arctic Fury

In early 1853, experienced California Trail guide Virginia Reeve is summoned to Boston by a mysterious benefactor who offers her a once-in-a-lifetime opportunity: lead a party of 12 women into the wild, hazardous Arctic to search for the lost Franklin Expedition. It's an extraordinary request, but the party is made up of extraordinary women: mountaineers and battlefield nurses, interpreters and journalists, other adventurers. Each brings her own strengths and skills to the expedition--and her own unsettling secrets.

A year and a half later, back in Boston, Virginia is on trial for her life, accompanied by only five survivors. Represented by an incompetent attorney, persecuted by the rich parents of her supposed victim, and desperate to keep her own secrets, Virginia believes her trial is unwinnable. Told in alternating timelines that follow both the sensational murder trial in Boston and the dangerous, deadly progress of the women's expedition into the frozen North, this heart-pounding story will hold readers rapt as a chorus of voices answer the trial's all-consuming question: what happened out there on the ice?

The Children's Blizzard: A Novel (Hardcover)