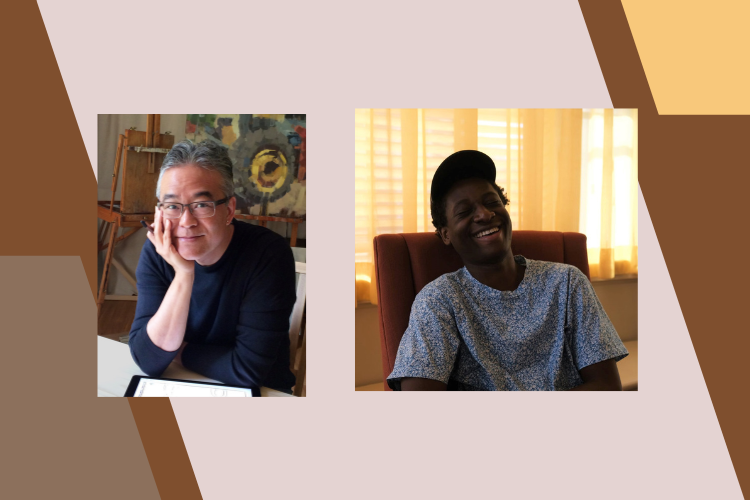 We are thrilled to welcome Aaron Caycedo-Kimura and Tawanda Mulalu back to Barrett Bookstore as they celebrate the release of their new books: Common Grace (Caycedo-Kimura) and Please make me pretty, I don't want to die (Mulalu). The evening will include conversation, readings, book signing, food and drink. All are welcome. Please RSVP: pbbarrettbooks@gmail.com.

Aaron Caycedo-Kimura is a writer and visual artist. He is the author of two poetry collections: Ubasute, which won the 2020 Slapering Hol Press Chapbook Competition, and the full-length collection Common Grace, forthcoming from Beacon Press in October 2022. His honors include a Robert Pinsky Global Fellowship in Poetry, a St. Botolph Club Foundation Emerging Artist Award in Literature, and nominations for the Pushcart Prize, Best of the Net, and Best New Poets anthologies. His poetry has appeared or is forthcoming in Beloit Poetry Journal, Plume Poetry, Poetry Daily, RHINO, Pirene’s Fountain, Iamb, upstreet, Verse Daily, DMQ Review, Poet Lore, The Night Heron Barks, and elsewhere. He currently serves as a member of the Slapering Hol Press Advisory Committee and as a reader for Beloit Poetry Journal. Aaron earned his MFA in creative writing from Boston University and is also the author and illustrator of Text, Don’t Call: An Illustrated Guide to the Introverted Life (TarcherPerigee, 2017).

Tawanda Mulalu was born in Gaborone, Botswana. He is the author of Nearness (The New Delta Review, 2022) and Please make me pretty, I don't want to die (Princeton University Press, 2022). His poems appear or are forthcoming in Brittle Paper, Lana Turner, Lolwe, The New England Review, The Paris Review, A Public Space and elsewhere. He mains Ken in Street Fighter.

“The quality of wonder, lucid and luminous, energizes Aaron Caycedo-Kimura’s Common Grace. In these poems, the visible world radiates meaning, memory becomes palpable, and loss is acknowledged. Caycedo-Kimura brings a wry, tender, musical and unsentimental attention to family love, sexual love, love of nature and the underlying love of art.”

“These well-wrought poems show a distinct artistic sensibility. Through personal loss, grief, and love, they enter the domain of history and human migrations. Common Grace is an uncommon book, elegant, at times tough-minded, also moving.”

“I love the tender, lyrical ‘labored stroke’ with which poet-painter Aaron Caycedo-Kimura makes his art. With a poet’s sensibility and an artist’s cool eye, he elegizes and celebrates his family’s heartbreaking, triumphant history, and his own. Common Grace, his first full-length collection, pays fluent loving attention to life and art—and their rewards glow!”

“In vivid, moving poems that span cultures, generations, and geographies, Aaron Caycedo-Kimura’s Common Grace evokes the mysteries and wonder in everyday life. Here is a poet of clear-eyed originality, big-hearted and wise—and a book to read again and again.”

—Matthew Thorburn, author of The Grace of Distance

“Aaron Caycedo-Kimura’s debut full-length collection, Common Grace, spans decades, geography, and poetic styles and forms. At once a moving yet unsentimental tribute to his Japanese parents (who wanted ‘no funeral no obituary in the newspaper’), as well as an ars poetica of an introverted poet-painter, Common Grace is no common book of poetry. A better tribute than any gravestone or obituary, Common Grace (with its striking images, chorus of different forms, and historical narratives, including those of Japanese internment) announces Caycedo-Kimura as an important new voice making art from the complexities and contradictions of being a third-generation Japanese American. In work that is both deeply personal and profoundly universal, Caycedo-Kimura, in looking at a photograph of his mother, writes (‘Tokyo Army Hospital, 1957,’): ‘She’s twenty-nine, half my age. I want to go back in time, tell her something wise or at least helpful, but having lived through a world war, she already knows more than I do.’ The poems in Common Grace offer us both beauty and wisdom in equal measure.”

Here is the first major collection from poet-painter Aaron Caycedo-Kimura: a deft, deeply felt triptych that opens with his life as an artist, then delves into the inherited trauma within his Japanese American family, and finally ends on the close bond between him and his wife. Now available for preorder at Beacon Press, Indiebound, Barnes & Noble, Bookshop.org, and Amazon.

Part One, “Soul Sauce,” takes us from his childhood encounter with an inkwell at Roseland Elementary in 1969 to his outdoor easel perched on Long Island Sound. Part Two, “Ubasute,” is named after the mythical Japanese practice wherein “a grown son lifts / his aged mother on his back, / delivers her to a mountain, / leaves her to die.” This concept frames a wrenching portrayal of his parents’ decline and death while also summoning up his father’s time in the American internment camps of WWII and his mother’s memories of the firebombing of Tokyo. Part Three, “Gutter Trees,” gives us affecting love poems to his wife and the creative lives they’ve built together. Ranging in scope from private moments to the sweep of familial heritage, Caycedo-Kimura’s poems are artful and subtle, but never quiet.

ABOUT PLEASE MAKE ME PRETTY I DON'T WANT TO DIE

"I am moved by the cool, wounded clarity of Tawanda Mulalu’s poems, and startled by their flashes of stark, irrefutable knowing. Please make me pretty, I don’t want to die is an elegy, an aria, a prayer for bodies—and a nation—and a planet—on some dire cusp."—Tracy K. Smith, 22nd Poet Laureate of the United States

“Mulalu is very much aware of his Black body and the America around him—of the shootings, all the anxieties of being ‘there,’ and the simple yet difficult task of going outside. But at the same time he has created with such clarity this incredible archive of arias, elegies, prayers, and song. These are a delight to read and to listen to, a frenzied spring of hope.”—Clifton Gachagua, author of Madman at Kilifi

“The resonant tone of dreams is never far from Tawanda Mulalu’s deliciously and wildly imaginative lines, even though this dreamer is wide awake. Everything this poet touches shows plainly a genuine strangeness, as if it had just come into existence. He discovers a new world at every turn of the street, with wit as well as wonder. In line after line, he sings.”—Cal Bedient, author of The Breathing Place