An Evening of CT Crime + Tessa Wegert + The Kind to Kill 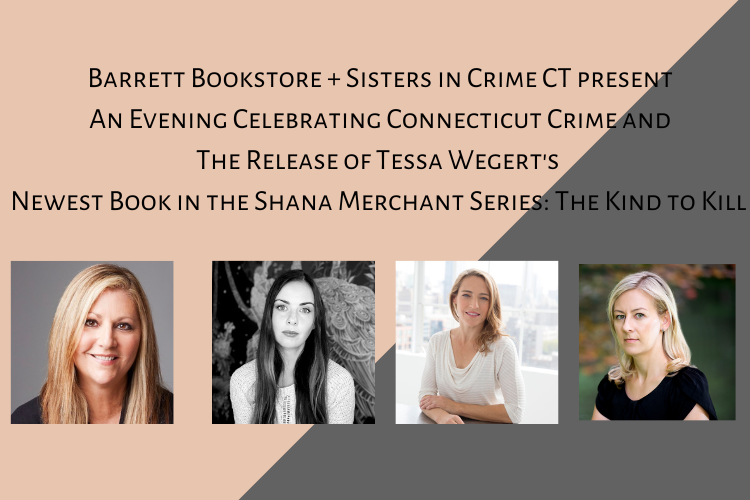 Please join Barrett Bookstore for an evening celebrating Connecticut crime + the release of Tessa Wegert’s new book, the latest in the Shana Merchant series: The Kind to Kill. It will be a festive evening on Tuesday, December 6 filled with new books and conversation about the thriller writing process and trends, with a good dose of behind-the-scenes stories thrown in! Food and drink will be served. To join, RSVP: pbbarrettbooks@gmail.com.

ABOUT THE KIND TO KILL

A missing tourist spells trouble for Senior Investigator Shana Merchant in this page-turning twisty mystery set in an atmospheric island community with a small-town vibe.

She’s also bound by blood to a serial killer. And after months of concealing the truth from the world as she hunted Blake Bram down, her secret is finally out.

Shana just wants to get on with her life and win back her community’s trust. But as Alexandria Bay fills up with tourists in advance of the annual festival known as Pirate Days, a visitor goes missing, and the case threatens to destroy not just the celebrations, but what remains of Shana’s reputation.

Shana’s not to blame for the killer in her family, but people are starting to whisper that she attracts trouble. That A-Bay was safer before she arrived. And as the investigation deepens, Shana starts to fear that they may be right.

Because while Bram is gone, he is far from forgotten.

The Shana Merchant novels are a brilliant blend of chilling psychological thriller and gripping police procedural, set against the beautiful backdrop of the Thousand Islands.

Wendy Walker is the USA Today and Sunday Times bestselling author of All Is Not Forgotten, Emma In the Night, The Night Before, Don’t Look for Me, and American Girl. Her work has been published in 23 foreign languages and optioned for both film and television. Prior to writing, she worked as a lawyer and investment banker, and trained for competitive figure skating. Her next novel, What Remains, will be out next June. Wendy lives in Connecticut with her family.

Lynne Constantine is an internationally bestselling author who writes with her sister under the pen name, Liv Constantine. Their books have sold over one million copies worldwide, been translated into 28 languages, and are in development for both television and film. Their debut novel, The Last Mrs. Parrish, is a Reese Witherspoon book club selection. Lynne also writes The Jack Logan series under the pen name L.C. Shaw. Lynne has a master’s degree from Johns Hopkins University. She is a board member of International Thriller Writers.

Kat Rosenfield is the author of the acclaimed No One Will Miss Her, and partnered with the late, great Stan Lee to coauthor the New York Times bestselling A Trick of Light. She also wrote two acclaimed YA titles, the Edgar-nominated Amelia Anne Is Dead and Gone and Inland. Her work as a pop culture writer has appeared in Vulture, Entertainment Weekly, The New York Times, and Reason magazine, as well as in a weekly column at Unherd. Her next book, You Must Remember This, will be published by William Morrow in January 2023.

Tessa Wegert is the author of the popular Shana Merchant novels, which include Death in the Family, The Dead Season, Dead Wind, and The Kind to Kill. A former digital media strategist and freelance journalist, Tessa has contributed to such publications as Forbes, The Huffington Post, The Economist, and The Globe and Mail. Raised in Quebec, she now lives with her husband and children in Connecticut, where she studies martial arts and is co-president of Sisters in Crime CT.

The Kind to Kill (Hardcover)