Courtney Maum and Sarah Maslin Nir in Conversation: The Year of the Horses/Horse Crazy 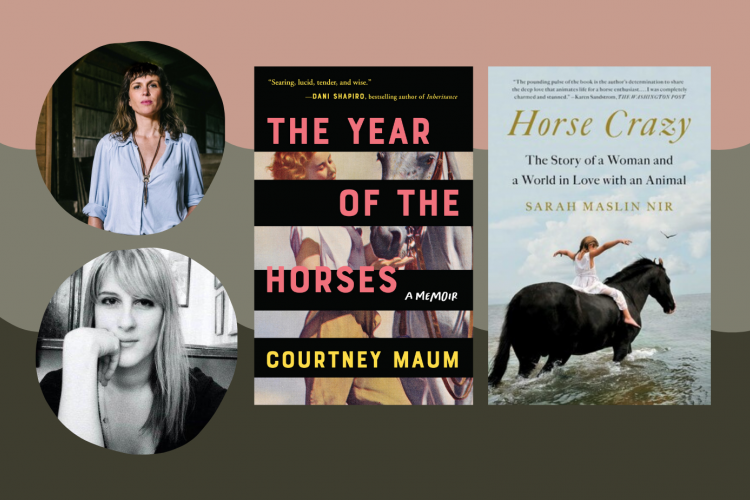 We are THRILLED to celebrate the release of Courtney Maum's new memoir The Year of the Horses with a not-to-be-missed event at Barrett Bookstore on Wednesday, May 4. Courtney will be in conversation with New York Times staff reporter and author Sarah Maslin Nir. The conversation will be followed by a book sale and signing. Wine and light bites will be served. We kindly request you RSVP to this FREE event.

ABOUT THE YEAR OF THE HORSES

Sharp, heartfelt, and cathartic, The Year of the Horses captures a woman’s journey out of depression and the horses that guide her, physically and emotionally, on a new path forward.

At the age of thirty-seven, Courtney Maum finds herself in an indoor arena in Connecticut, moments away from stepping back into the saddle. For her, this is not just a riding lesson, but a last-ditch attempt to pull herself back from the brink even though riding is a relic from the past she walked away from. She hasn’t been on or near a horse in over thirty years.

Although Maum does know what depression looks like, she finds herself refusing to admit, at this point in her life, that it could look like her: a woman with a privileged past, a mortgage, a husband, a healthy child, and a published novel. That she feels sadness is undeniable, but she feels no right to claim it. And when both therapy and medication fail, Courtney returns to her childhood passion of horseback riding as a way to recover the joy and fearlessness she once had access to as a young girl. As she finds her way, once again, through the world of contemporary horseback riding—Courtney becomes reacquainted with herself not only as a rider but as a mother, wife,  daughter,  writer, and woman. Alternating timelines and braided with historical portraits of women and horses alongside history’s attempts to tame both parties, The Year of the Horses is an inspiring love letter to the power of animals—and humans—to heal the mind and the heart.

Courtney Maum is the author of the novels Costalegre (a GOOP book club pick and one of Glamour Magazine’s top books of the decade), I Am Having So Much Fun Here Without You and Touch (a New York Times Editor’s Choice and NPR Best Book of the Year selection), the Zibby Award-winning guidebook Before and After the Book Deal: A writer’s guide to finishing, publishing, promoting, and surviving your first book, and the forthcoming memoir, The Year of the Horses. A nominee for the Joyce Carol Oates prize, Courtney’s short fiction and essays about creativity have been widely published in outlets such as The New York Times and Interview Magazine, her short story This is Not Your Fault was turned into an Audible original, and with her filmmaker husband, she has co-written films that have debuted at Sundance and won awards at Cannes. The executive director of the nonprofit learning collaborative, The Cabins, Courtney currently works as a writing coach and hosts the “Beyond the Writing of Fiction” conversation series through Edith Wharton’s storied home, The Mount.

ABOUT HORSE CRAZY: THE STORY OF A WOMAN AND A WORLD IN LOVE WITH AN ANIMAL

In the bestselling tradition of works by such authors as Susan Orlean and Mary Roach, a New York Times reporter and Pulitzer Prize finalist explores why so many people—including herself—are obsessed with horses.

It may surprise you to learn that there are over seven million horses in America—even more than when they were the only means of transportation—and nearly two million horse owners. Acclaimed journalist and avid equestrian Sarah Maslin Nir is one of them; she began riding horses when she was just two years old and hasn’t stopped since. Horse Crazy is a fascinating, funny, and moving love letter to these graceful animals and the people who—like her—are obsessed with them. It is also a coming-of-age story of Nir growing up an outsider within the world’s most elite inner circles, and finding her true north in horses.

Nir takes readers into the lesser-known corners of the riding world and profiles some of its most captivating figures. We meet Monty Roberts, the California trainer whose prowess earned him the nickname “the man who listens to horses,” and his pet deer; George and Ann Blair, who at their riding academy on a tiny island in Manhattan’s Harlem River seek to resurrect the erased legacy of the African American cowboy; and Francesca Kelly, whose love for an Indian nobleman shaped her life’s mission: to protect an endangered Indian breed of horse and bring them to America.

Woven into these compelling character studies, Nir shares her own moving personal narrative. She details her father’s harrowing tale of surviving the Holocaust, and describes an enchanted but deeply lonely upbringing in Manhattan, where horses became her family. She found them even in the middle of the city, in a stable disguised in an old townhouse and in Central Park, when she chased down truants as an auxiliary mounted patrol officer. And she speaks candidly of how horses have helped her overcome heartbreak and loss.

Infused with heart and wit, and with each chapter named after a horse Nir has loved, Horse Crazy is an unforgettable blend of beautifully written memoir and first-rate reporting.

Sarah Maslin Nir is a staff reporter for The New York Times. Nir was a Finalist for the 2016 Pulitzer Prize for “Unvarnished,” her more than yearlong investigation into New York City’s nail salon industry that documented the exploitative labor practices and health issues manicurists face. Before becoming a staff reporter, Nir freelanced for eleven sections of the paper, traveling to the Alaskan wilderness in search of people who prefer to live in isolation, and to post-earthquake Haiti. She began as the New York Times’s nightlife columnist, covering 252 parties in eighteen months, and continued on to a career that has taken her from covering kidnappings by terrorists in Benin, West Africa, to wildfires in California, and everything in between. A born and raised Manhattanite, Nir earned a masters at the Columbia Graduate School of Journalism, and graduated from Columbia University, where she studied politics and philosophy. She is the author of Horse Crazy. She loves horses.

The Year of the Horses: A Memoir (Hardcover)

Horse Crazy: The Story of a Woman and a World in Love with an Animal (Hardcover)