Amelia Pang: Made in China 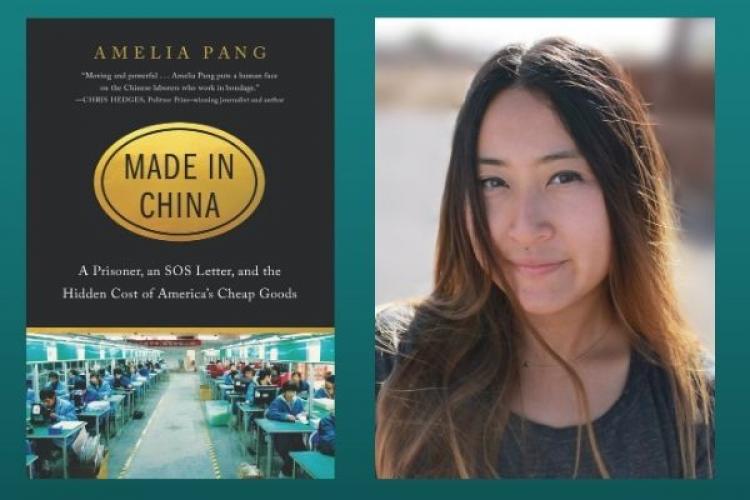 Darien Library and Barrett Bookstore are excited to welcome award-winning journalist, Amelia Pang. She will discuss her first book, Made in China. Amelia will be in conversation with Dexter Tiff Roberts, Senior fellow at the Atlantic Council Asia Security Initiative; adjunct instructor in political science and Mansfield Fellow at the University of Montana; and author of recently published The Myth of Chinese Capitalism: The Worker, the Factory and the Future of the World.

About Made in China

The handwritten note, found in a box of Halloween decorations purchased from an Oregon Kmart, read: If you occasionally buy this product, please kindly resend this letter to the World Human Rights Organization. Thousands people here who are under the persecution of the Chinese Communist Party Government will thank and remember you. Written and smuggled out by Sun Yi, a political prisoner forced into grueling, unpaid labor in an extralegal detention center, this plea for help would lead award-winning journalist Amelia Pang in pursuit of its origins. Made in China: A Prisoner, an SOS Letter, and the Hidden Cost of America’s Cheap Goods a finalist for the 2019 J. Anthony Lukas Work-in-Progress Award, is Pang’s thorough exploration of the closely guarded secret of a network of Chinese forced labor—laogai—and the often hidden, tortuous human cost of the cheap consumer goods exported to America and Europe, and sold by companies including Apple, H&M, Kmart, and Walmart.

“Pang forces us to place the sanctity of human life before the maximization of profit,” says Pulitzer Prize-winning journalist Chris Hedges. “It is hard to finish this book and not be outraged, not only at the Chinese government but at the American corporations that knowingly collaborate with and profit from this modern slave trade.”

Amelia Pang is an award-winning journalist who has written for publications such as Mother Jones and the New Republic. She has covered topics ranging from organic import fraud to the prevalence of sexual violence on Native American reservations. In 2017, the Los Angeles Press Club awarded her first place in investigative journalism for her undercover reporting on the exploitation of smuggled immigrants who are recruited to work in Chinese restaurants. Amelia grew up in a Mandarin-speaking household in Maryland, and holds a BA in literary studies from the New School. She lives near Washington, DC, with her husband, an organic farmer. This is her first book.

**Dexter Tiff Roberts ** is an award-winning writer and speaker on China now serving as a Senior Fellow at the Atlantic Council Asia Security Initiative, a Fellow at the Maureen and Mike Mansfield Center, and an adjunct instructor in political science at the University of Montana. Previously he was China bureau chief and Asia News Editor at Bloomberg Businessweek, based in Beijing for more than two decades. He has reported from all of China's provinces and regions including Tibet and Xinjiang, covering the rise of companies and entrepreneurs, manufacturing and migrants, demography and civil society, and politics and security. He has also reported from North Korea, Mongolia and Cambodia, on China's growing economic and political influence. Roberts' first book, The Myth of Chinese Capitalism: The Worker, the Factory, and the Future of the World, was published by St. Martin's Press in March 2020. He has also founded and publishes a weekly newsletter called Trade War. He has a BA in Political Science from Stanford University and Master of International Affairs from Columbia University and studied Mandarin Chinese at Taiwan Normal University.

Made in China: A Prisoner, an SOS Letter, and the Hidden Cost of America’s Cheap Goods (Hardcover)