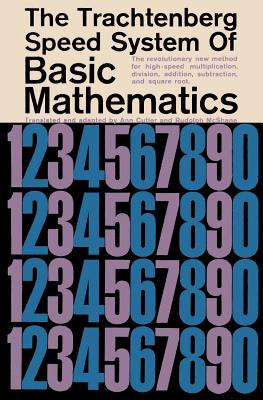 The Trachtenberg Speed System of Basic Mathematics is a revolutionary system for calculating and teaching basic math. Children, who had repeatedly failed in arithmetic until their parents sent them to learn this method, were able to perform amazing calculations within seconds. In one demonstration, a ten year old kid when asked to multiply 5132437201 times 452736502785 simply wrote on the blackboard the answer, 2323641669144374104785 in seventy seconds. He never set up the basic and familiar line by line chart, multiplying and adding each row of numbers. Instead, he just wrote down the answer without any of the intermediate steps. To demonstrate his method, Trachtenberg chose children who were doing poorly in their school work. These were children used to failure, shy and withdrawn; or the other extreme, boastful and unmanageable. The children's response to the new, easy way of doing arithmetic was immediate. They found it delightfully like a game. The feeling of accomplishment soon made them lose their unhappy traits. Equally important were the by-products the pupils garnered while learning the new system. As these youngsters became proficient in handling numbers, they began to spurt ahead in all their studies. Their IQs went up too To prove the point that anyone can learn to do problems quickly and easily, Trachtenberg successfully taught the system to a ten-year-old-presumably retarded-child. Not only did the child learn to compute, but his IQ rating was raised. Since all problems are worked in the head, he acquired excellent memory habits and his ability to concentrate was increased. The Trachtenberg system, once learned, can take the drudgery out of the arithmetic that is part of your daily stint. Experts believe that the Trachtenberg system could have far-reaching an effect on education and science.