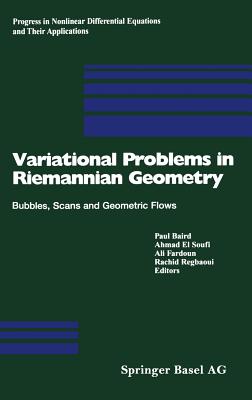 This volume has grown from a conference entitled Harmonic Maps, Minimal Sur faces and Geometric Flows which was held at the Universite de Bretagne Occi dentale from July 7th-12th, 2002, in the town of Brest in Brittany, France. We welcomed many distinguished mathematicians from around the world and a dy namic meeting took place, with many fruitful exchanges of ideas. In order to produce a work that would have lasting value to the mathematical community, the organisers decided to invite a small number of participants to write in-depth articles around a common theme. These articles provide a balance between introductory surveys and ones that present the newest results that lie at the frontiers of research. We thank these mathematicians, all experts in their field, for their contributions. Such meetings depend on the support of national organisations and the local community and we would like to thank the following: the Ministere de l'Education Nationale, Ministere des Affaires Etrangeres, Centre National de Recherche Sci en tifique (CNRS), Conseil Regional de Bretagne, Conseil General du Finistere, Com munaute Urbaine de Brest, Universite de Bretagne Occidentale (UBO), Faculte des Sciences de l'UBO, Laboratoire de Mathematiques de l'UBO and the Departement de Mathematiques de l'UBO. Their support was generous and ensured the success of the meeting. We would also like to thank the members of the scientific committee for their advice and for their participation in the conception and composition of this volume: Pierre Berard, Jean-Pierre Bourguignon, Frederic Helein, Seiki Nishikawa and Franz Pedit.