The Loneliest Polar Bear: A True Story of Survival and Peril on the Edge of a Warming World (Hardcover) 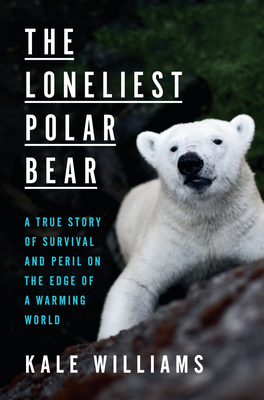 “A moving story of abandonment, love, and survival against the odds.”—Dr. Jane Goodall

The heartbreaking and ultimately hopeful story of an abandoned polar bear cub named Nora and the humans working tirelessly to save her and her species, whose uncertain future in the accelerating climate crisis is closely tied to our own

Six days after giving birth, a polar bear named Aurora got up and walked away from her den at the Columbus Zoo, leaving her tiny squealing cub to fend for herself. Hours later, Aurora still hadn’t returned. The cub was furless and blind, and with her temperature dropping dangerously, the zookeepers entrusted with her care felt they had no choice: They would have to raise one of the most dangerous predators in the world by hand. Over the next few weeks, a group of veterinarians and zookeepers worked around the clock to save the cub, whom they called Nora.

Humans rarely get as close to a polar bear as Nora’s keepers got to their fuzzy charge. But the two species have long been intertwined. Three decades before Nora’s birth, her father, Nanuq, was orphaned when an Inupiat hunter killed his mother, leaving Nanuq to be sent to a zoo. That hunter, Gene Agnaboogok, now faces some of the same threats as the wild bears near his Alaskan village of Wales, on the westernmost tip of the North American continent. As sea ice diminishes and temperatures creep up year after year, Agnaboogok and the polar bears—and everyone and everything else living in the far north—are being forced to adapt. Not all of them will succeed.

Sweeping and tender, The Loneliest Polar Bear explores the fraught relationship humans have with the natural world, the exploitative and sinister causes of the environmental mess we find ourselves in, and how the fate of polar bears is not theirs alone.

Kale Williams is a reporter at The Oregonian/OregonLive, where he covers science and the environment. A native of the Bay Area, he previously reported for the San Francisco Chronicle. He shares a home with his wife, Rebecca; his two dogs, Goose and Beans; his cat, Torta; and his step-cat, Lucas.

“The Loneliest Polar Bear offers readers an adorable polar bear cub—and a roving, clear-eyed exploration of climate change and how the bears captured the public imagination.”—Outside

“Kale Williams not only writes eloquently about little Nora and the dedication of the zoo staff—the ‘Nora Moms’ who save her life—but he also uses the tale as an entry point into important issues of our times: climate change that affects polar bears in the wild, the need for us to develop a more respectful relationship with the natural world, and the ethics of keeping animals in captivity.” —Dr. Jane Goodall, DBE, founder of the Jane Goodall Institute and a UN Messenger of Peace

“The polar bear is a symbol of great majesty and beauty, but it’s also part of an ecosystem that includes some of the most resilient and remarkable people on earth. None of them deserve the trauma that climate change is now inflicting. This book tells the story of the companies that put our planet in this predicament, and how we might get out of it.”—Bill McKibben, New York Times bestselling author of Falter

“An informative and heartfelt portrayal of the Arctic in distress . . . This page-turner is sure to captivate animal lovers, nature enthusiasts, and anyone looking for a touching story.”—Publishers Weekly (starred review)

“Adroitly blending history, science, and good, old-fashioned storytelling, The Loneliest Polar Bear asks us to engage both our hearts and our minds as we reflect upon the existential threat posed by human-caused climate change.”—Michael E. Mann, author of The New Climate War

“We know that polar bears are the canary in the climate change coal mine. But Williams goes further, expertly demonstrating the conflicting human and corporate interests that will come to affect every single one of us.”—Caitlin Doughty, New York Times bestselling author of Smoke Gets in Your Eyes

“Eye-opening . . . Few readers will be able to resist the charms of this feisty and strong-willed cub. . . . A well-written tribute to a creature whose struggle to survive is one of many calls to action to save our ailing planet.”—Kirkus Reviews

“In telling the uniquely moving story of Nora, a polar bear born at a zoo, Kale Williams invites us to reflect on the planet we live on and our responsibility toward it.”—Frans de Waal, New York Times bestselling author of Mama’s Last Hug

“Williams has given us a timely and well-written story about climate change along with so much more: a primer on polar bear behavior, a balanced take on the politics of zookeeping, and an evocative report on life in an Inupiat village on the cusp of environmental disaster.”—Nate Blakeslee, New York Times bestselling author of American Wolf