The American Experiment: Dialogues on a Dream (Hardcover) 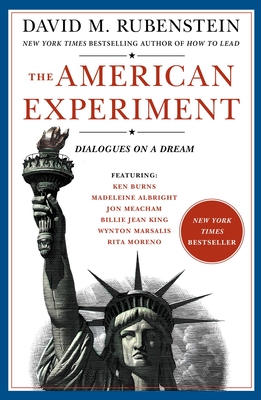 The capstone book in a trilogy from the New York Times bestselling author of How to Lead and The American Story and host of Bloomberg TV’s The David Rubenstein Show—American icons and historians on the ever-evolving American experiment, featuring Ken Burns, Madeleine Albright, Wynton Marsalis, Billie Jean King, Henry Louis Gates Jr., and many more.

In this lively collection of conversations—the third in a series from David Rubenstein—some of our nations’ greatest minds explore the inspiring story of America as a grand experiment in democracy, culture, innovation, and ideas.

Exploring the diverse make-up of our country’s DNA through interviews with Pulitzer Prize–winning historians, diplomats, music legends, and sports giants, The American Experiment captures the dynamic arc of a young country reinventing itself in real-time. Through these enlightening conversations, the American spirit comes alive, revealing the setbacks, suffering, invention, ingenuity, and social movements that continue to shape our vision of what America is—and what it can be.

David M. Rubenstein is the New York Times bestselling author of How to Lead, The American Experiment, and The American Story. He is cofounder and cochairman of The Carlyle Group, one of the world’s largest and most successful private equity firms. Rubenstein is Chairman of the Boards of the John F. Kennedy Center for the Performing Arts, the Council on Foreign Relations, and the National Gallery of Art. He is an original signer of The Giving Pledge and a recipient of the Carnegie Medal of Philanthropy and the MoMA’s David Rockefeller Award. The host of Bloomberg Wealth with David Rubenstein on Bloomberg TV and The David Rubenstein Show: Peer-to-Peer Conversations on Bloomberg TV and PBS, he lives in the Washington, DC, area.

“Influential Americans talk about the nation’s past and future. . . . These conversations—warm, engaging, and informative—help Rubenstein point up America’s particular qualities that “have made the whole American Experiment work” even though, facing significant challenges, the country has fallen short.” — Kirkus Reviews

“In this fascinating compilation of interviews with historians, musicians, athletes, journalists, and other notables of our times, David Rubenstein paints what he calls the genetic picture of this country, and why it has succeeded—so far.” —Nina Totenberg, Legal Affairs Correspondent, NPR

“David Rubenstein is a deeply committed citizen and patriot, and a keen observer of human nature with a passion for history. As fellow citizen experimenters, he is suggesting we all engage in thinking about the past and present in order to forge a future that fulfills the promise of America.” — Yo-Yo Ma, Cellist

“In this timely and important book David Rubenstein explores the lessons of the past that will help us through this historically challenging time. It is just the right book at exactly the right time.”  — Tom Brokaw, author of The Greatest Generation

“David Rubenstein’s insatiable curiosity and intellect bring out the best from those with whom he is in conversation, evoking rich interactions and making history entertaining. The American Experiment captures the essence of the American leader and the pivotal moments in our country’s history.” — Deborah F. Rutter, President, John F. Kennedy Center for the Performing Arts

“An extraordinary opportunity to marvel at the United States—and to understand her principles so that we might advance them in service to the republic.” — Lawrence Bacow, President, Harvard University

“In this brilliant book, we hear from the best minds in the country about the unfinished voyage of American life. A must-read to understand our unique nation, its extraordinary legacy, and our collective future!” — Admiral James Stavridis, 16th Supreme Allied Commander at NATO and author of Sailing True North: Ten Admirals and the Voyage of Character

“David Rubenstein has a unique ability to ask the right penetrating questions that elicit illuminating answers from fascinating people who paint a complete and detailed picture of the American experiment from all sides. As the country’s pre-eminent patriotic philanthropist, David is now doing even more to preserve American history with this important project.” — Bret Baier, Chief Political Anchor, Fox News & New York Times bestselling author

“At this turbulent moment in our nation’s history, this captivating dialogue about the meaning of democracy and the American dream provides much needed inspiration and hope. What a terrific book!” — Doris Kearns Goodwin

“A truly amazing new book. The American Experiment is urgently needed especially during this very strenuous moment in our American history.” — Wolf Blitzer

“A stirring reminder of what our ‘American experiment’ has achieved so far and what’s at stake as we move forward.” —Katie Couric

“A dazzling set of conversations that inspire and illuminate. David Rubenstein highlights the salient features of the American experiment, an experiment so novel that when it began most serious observers thought it would collapse in a few years.” — Fareed Zakaria

“At a time when listening is harder and divisions run deeper, David’s interviews soar above the noise. They are hopeful, inspiring, and rigorously authentic.”  — Valerie Jarrett

“A book that forces America to look in the mirror. It’s a reality pill.” — LL COOL J