Learn to Play the Shinobue (Paperback) 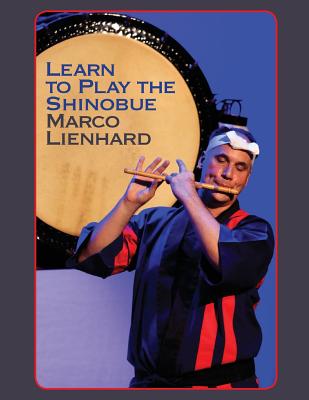 This is an instruction book on how to play the Japanese bamboo flute: the Shinobue.It includes songs from Japanese folk songs as well as original new compositions by Marco Lienhard. The songs and Etudes will challenge any level of playing. The exercises will help you better your sound and get more skilled at playing the Fue.Marco Lienhard was a member of Ondekoza the legendary Taiko group. He has traveled around the world performing the Fue, Taiko, and Shakuhachi. You will enjoy playing original songs from this collection of Shinobue songs.This will help you to learn how to play the Shinobue. For those who play, the book will help you get better at playing. Some of the included songs will allow you to develop your solo skills as well as play the Shinobue to Taiko drumming songs.This is a great study guide for any levels of playing. Challenge yourself with more difficult songs or learn how to get a sound on the Shinobue and practice the easier songs. This book will help you in your discovery of the Shinobue. Marco Lienhard gives a background on his discovery of the Shinobue with an account of his time spent with Ondekoza- the legendary Taiko group.A great gift for friends who are into Japanese flutes or World Flutes. Recorded songs will be available separately for those who want to play along.

Marco Lienhard is the Director of Taikoza and the East Winds Ensemble, two New York City-based professional musical organizations that showcase traditional and contemporary Japanese music and performing arts through numerous concerts and educational programs. Well-known and respected as a gifted composer and solo-performing artist on the Fue, Shakuhachi and Taiko, Marco is also a popular music teacher and recording artist. In 1995, Marco was featured as the Shakuhachi soloist during the New York City Opera's premiere of Toshiro Mayuzumi's opera "Kinkakuji. In 2015, he was the Shakuhachi soloist for the premiere of Hosokawa's "Voyage X" with the Juilliard New Music Ensemble. Marco regularly performs as a solo artist and teaches internationally to students in the United States, Argentina, Brazil, Uruguay, Italy, Switzerland and Canada. He has performed at Carnegie Hall and Madison Square Garden (New York), Suntory Hall and Osaka Festival Hall (Japan), and Tchaikovsky Hall and House of Music (Moscow) among other venues throughout the world. He has performed for corporate and private parties, including Price Waterhouse Cooper, Pepsi, Merck, Diesel, Gillette, etc. Marco has composed and recorded more than 10 CD showcasing Shakuhachi, Taiko and Fue. His music can be heard on iTunes and the Nintendo Wii game: "Red Steel 1 and 2." In 2015, he released two CD of his compositions with Taikoza: "Voice of the Earth" and "Tree Spirit." Marco Lienhard lived in Japan for 18 years (1981-1998) as a member of Ondekoza, the legendary Japanese professional Taiko group, whose members were renowned for completing the Boston Marathon and then energetically playing Taiko for other runners as they crossed the finish line. During his years with Ondekoza, he mastered performing the Taiko, Fue, Noh theater flute and, under the tutelage of Katsuya Yokoyama Sensei, the Shakuhachi. Marco was Ondekoza's principal soloist on the Odaiko, Nagado and Shakuhachi. He was greatly influenced by the stage vision and presentation of Taiko by Ondekoza's acclaimed Founding Director Tagayasu Den, who instigated the renaissance of Taiko and created what modern Taiko is today. From 1990 to 1993, Marco's most remarkable accomplishment for Ondekoza was organizing and running a three-year long, 9,000 mile run around the perimeter of the continental United States in which the group's members, including Marco, ran the entire distance while performing taiko in communities along the journey.