The Complete Four-Page Series And Other Essays (Paperback) 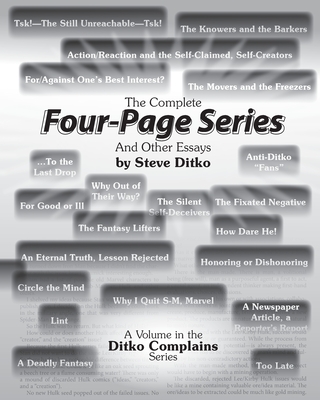 This collection offers a fresh insight into the mind of innovative writer and artist, Steve Ditko. Part I collects all nine issues of The Four-Page Series, a newsletter he originally published between 2012 and 2015. Essay topics include flawed thinking and misbehavior of some comic book fans; choice, rationality, logic, emotion and the nature of artistic creation when more than one person is involved; how he made various decisions regarding his work; his thoughts and actions in developing prominent comics characters such as Spider-Man and Dr. Strange. The latter has been the subject of speculation (and outright fabrication) among fans in the decades since, but Ditko gives his first-hand accounts here.

Part II includes over 20 additional essays in which Ditko explores history, philosophy, uncommon sense, the Law of Identity, the Founding Fathers, nature, comics and the creation of other characters he wrote and drew. Robin Snyder provides an introduction and other essays. Rodney Schroeter offers his thoughts in "Metaphysics and Fantasy." This book is part of a new, ongoing series: Ditko Complains.