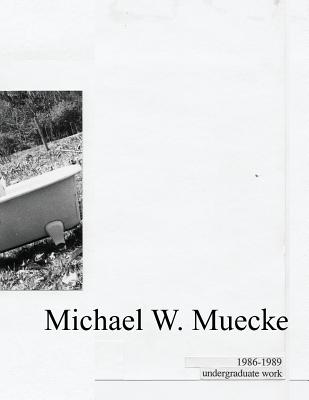 Designs completed by Michael W. Muecke between 1986 and 1989, while studying in the Bachelor of Design with a Major in Architectur program at the University of Florida in Gainesville, Florida. The portfolio is a time capsule of technology: the book consists of a facsimile production of both the original paste-up version and the photocopy version used by the author to apply for the MArch program at the University of Florida.

Mikesch Muecke grew up playing in the forests and fields that surround the hamlet of Spork-Eichholz (now Detmold) in the princedom of Lippe in northwestern Germany before realizing that he wouldn't be happy to stay put. Not knowing what to do after graduating from the nearby Gymnasium in Lemgo, he took off with a friend to settle in Canada, and quickly found out that there was a gap between projection and reality. He continued to work and travel for a year through Mexico and the United States, met his wife at the University of Chicago, returned to Germany for five years, and then settled in the United States for good in 1985. After studying architecture at the University of Florida and Princeton University, he started teaching at Iowa State University where he has been living, designing, and writing since 1995. In 2005 he started his own publishing house, Culicidae Press, LLC (peer-reviewed), followed by Hog Press (independent and non-profit), Obvious Press (private label books for polytekton), and has since then designed and published books, websites, and other media vehicles for a wide variety of clients. Check out Mikesch' web site at www.polytekton.com for more information about what he's up to.