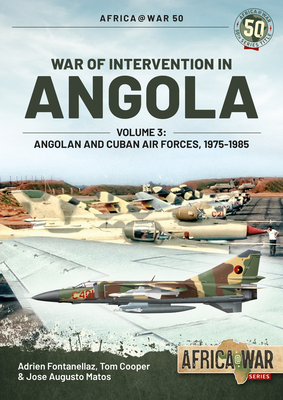 War of Intervention in Angola, Volume 3 covers the air warfare during the II Angolan War - fought 1975-1992 - through narrating the emergence and operational history of the Angolan Air Force and Air Defence Force (FAPA/DAA) as told by Angolan and Cuban sources.

Most accounts of this conflict - better known in the West as the 'Border War' or the 'Bush War', as named by its South African participants - tend to find the operations by the FAPA/DAA barely worth mentioning. A handful of published histories mention two of its MiG-21s claimed as shot down by Dassault Mirage F.1 interceptors of the South African Air Force (SAAF) in 1981 and 1982, and at least something about the activities of its MiG-23 interceptors during the battles of the 1987-1988 period.

On the contrary, the story told by Angolan and Cuban sources not only reveals an entirely different image of the air war over Angola of the 1980s: indeed, it reveals to what degree this conflict was dictated by the availability - or the lack of - air power and shows that precisely this issue dictated the way that the commanders of the Cuban contingents deployed to the country - whether as advisors or as combat troops - planned and conducted their operations.

It is thus little surprising that the first contingent of Cuban troops deployed to Angola during Operation Carlota, in late 1975, included a sizeable group of pilots and ground personnel who subsequently helped build-up the FAPA/DAA from virtually nothing. They continued that work over the following 14 years - sometimes in cooperation of Soviet advisors and others from East European countries - eventually establishing an air force that by 1988 maintained what South African military intelligence and the media subsequently described as the 'most advanced air defence system in Africa'. Not only the air defence system in question, but also the aircraft serving as its extended arms, ultimately managed a unique feat in contemporary military history: they enabled an air force equipped with Soviet-made aircraft and trained along the Soviet doctrine to establish at least a semblance of aerial superiority over an air force equipped with Western-made aircraft and operating under a Western doctrine.

Based on extensive research with help of Angolan and Cuban sources, the 'War of Intervention in Angola, Volume 3', traces the military build-up of the FAPA/DAA in the period 1975-1992, its capabilities and its intentions. Moreover, it provides a unique, blow-by-blow account of its combat operations and experiences.

The volume is illustrated with 100 rare photographs, half a dozen maps and 15 colour profiles, thus providing a unique source of reference on this topic.