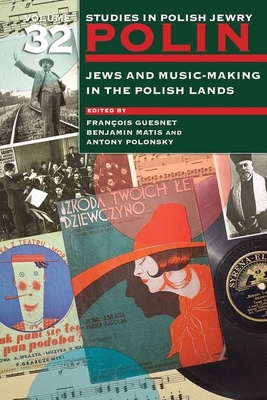 This is book number 32 in the Polin: Studies in Polish Jewry series.

With its five thematic sections covering genres from cantorial to classical to klezmer, this pioneering multi-disciplinary volume presents rich coverage of the work of musicians of Jewish origin in the Polish lands. It opens with the musical consequences of developments in Jewish religious practice: the spread of hasidism in the eighteenth century meant that popular melodies replaced traditional cantorial music, while the greater acculturation of Jews in the nineteenth century brought with it synagogue choirs. Jewish involvement in popular culture included performances for the wider public, Yiddish songs and the Yiddish theatre, and contributions of many different sorts---technical and commercial as well as creative---in the interwar years. Chapters on the classical music scene cover Jewish musical institutions, organizations, and education; individual composers and musicians; and a consideration of music and Jewish national identity. One section is devoted to the Holocaust as reflected in Jewish music, and the final section deals with the afterlife of Jewish musical creativity in Poland, particularly the resurgence of interest in klezmer music. The essays in this collection do not attempt to to define what may well be undefinable---what 'Jewish music' is. Rather, they provide an original and much-needed exploration of the activities and creativity of 'musicians of the Jewish faith'. CONTRIBUTORS: Eliyana R. Adler, Michael Aylward, Slawomir Dobrzanski, Paula Eisenstein-Baker, Beth Holmgren, Sylwia Jakubczyk-Sleczka, Daniel Katz, James Loeffler, Michael Lukin, Filip Mazurczak, Bozena Muszkalska, Julia Riegel, Ronald Robboy, Robert Rothstein, Joel E. Rubin, Adam J. Sacks, Amanda (Miryem-Khaye) Seigel, Eleanor Shapiro, Carla Shapreau, Tamara Sztyma, Bella Szwarcman-Czarnota, Joseph Toltz, Maja Trochimczyk, Magdalena Walig�rska, Bret Werb, Akiva Zimmerman.

Fran�ois Guesnet is Reader in Modern Jewish History in the Department of Hebrew and Jewish Studies at University College London and specializes in the early modern and nineteenth-century history of Polish Jews.Benjamin Matis is the spiritual leader of Agudath Achim Synagogue in Altoona, Pennsylvania. He qualified as a cantor and a Master of Sacred Music at the Jewish Theological Seminary of America.Antony Polonsky is Professor Emeritus of Holocaust Studies at Brandeis University and Chief Historian of the Polin Museum of the History of Polish Jews, Warsaw. He is the author of the three-volume History of the Jews in Poland and Russia, published in an abridged paperback version as The Jews in Poland and Russia: A Short History.