The Four Articles of Prague within the Public Sphere of Hussite Bohemia: On the 600th Anniversary of Their Declaration (1420-2020) (Hardcover) 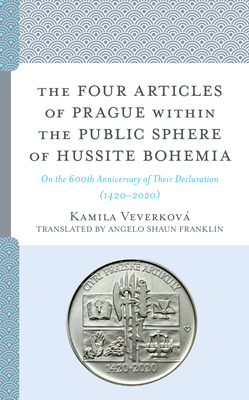 The Hussites' contribution to the transformation of the Czech state and its influence upon constitutional development were substantial. Various Hussite factions united over a program known as the Four Articles of Prague. In The Four Articles of Prague within the Public Sphere of Hussite Bohemia, Kamila Veverkov situates the Four Articles-presented here in a new translation by Angelo Franklin-in their political and economic context, emphasizing the societal reforms stimulated by the Hussite theological program. The Hussites demanded free proclamation of God's word, advocated public punishment of sins for all estates, rejected the secular rule of the church, and proclaimed the need to receive communion under both kinds. With no royal government in the country, the Czech Land Diet and its appointed administrators exercised practical power. The Czechs' arduous negotiations at the Council of Basel ultimately succeeded; the Council adopted the Four Articles of Prague in the form of the Compactata, which later became part of Czech law (1436). The Religious Peace of Kutn Hora (1485) expressed the new constitutional situation, allowing religious freedom. This unheard-of principle preceded other related legal developments by several centuries. Hussites permanently changed the form of the state and law, becoming a model for Europe in the transition from feudalism to a bourgeois society.