We Could Be: Bowie and his Heroes (Hardcover) 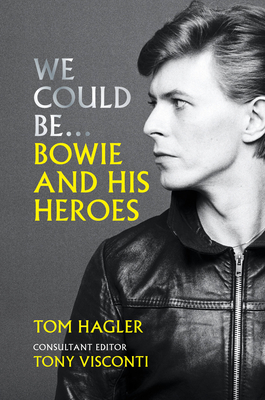 300 vignettes telling the stories of Bowie's encounters with fellow icons, from Dylan to Dali, Lennon to Lydon  Bowie has been written about in just about every conceivable way - but never quite like this. Tracing the star's encounters with fellow icons, We Could Be offers a new history of Bowie, collecting hundreds of short stories that together paint a portrait of humor, humility, compassion, tragedy and more. He embarrasses himself in front of Lennon and Warhol. He saves the life of Nina Simone. He is hated by Bob Dylan. He teaches Michael Jackson the moonwalk. Individually astonishing, these stories build to reveal a new picture of Bowie, one which shows his vulnerability, his sense of humour, his inner diva. Exhaustively researched from thousands of sources by BBC reporter and Bowie obsessive Tom Hagler, We Could Be is a history of Bowie unlike any you've seen before. Accompanied by integrated black and white photographs and stylish line illustrations, it is a fascinating, comic and compelling read.

Tom Hagler is a presenter and reporter for BBC World Service radio. He has covered major events and interviewed some of the biggest names across politics, music and science, with a roll call as diverse as Joe Biden, Kofi Annan, Grandmaster Flash and Buzz Aldrin. He was previously a reporter for the Sunday Telegraph and The Sunday Times.