Mondo: The Art of Soundtracks (Hardcover) 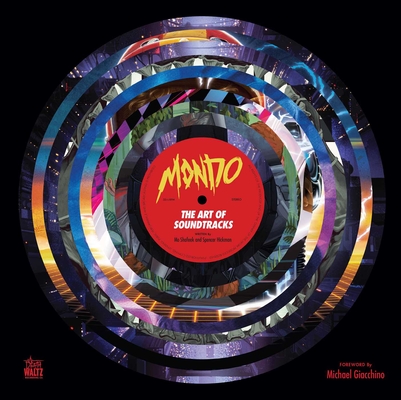 Following the success of The Art of Mondo comes another visually stunning and deliciously “pop” collection of art inspired by the soundtracks of films, video games, and more.

Mondo: The Art of Soundtracks highlights the all original art created exclusively for Mondo’s vinyl releases by world renowned artists for soundtracks to films, tv, and video games. Featuring stunning new takes on classic and modern material, this collection reinvigorates the bygone era of unique and collectible vinyl record artwork.

From vintage re-creations to new interpretations, from digital and painterly to photographic and abstract, the record art compiled in this volume captures the spirit of the record label that reinvigorated the soundtrack industry, in a beautiful mash-up fit for a book—or record—shelf.

MONDO is a company in Austin, Texas that works with incredible artists to create sought-after posters, soundtracks, and collectibles for pop culture past and present. Together with their sister label, Death Waltz Recording Co., Mondo creates unique vinyl pressings for soundtracks to films, TV, and video games that are accompanied by striking original art. This volume presents highlights and favorites from a decade of slinging vinyl.

Composer MICHAEL GIACCHINO has credits that feature some of the most popular and acclaimed film projects in recent history, including The Incredibles, Ratatouille, Star Trek, Jurassic World, Rogue One: A Star Wars Story, War for the Planet of the Apes, Spider-Man: Homecoming and Coco, in addition to the groundbreaking television series LOST. Giacchino’s 2009 score for the Pixar hit Up earned him an Oscar®, a Golden Globe®, the BAFTA, the Broadcast Film Critics' Choice Award and two GRAMMY® Awards. His most recent work for the critically acclaimed Jojo Rabbit earned him a BAFTA nomination.

Todd Gilchrist is a Los Angeles-based film critic and entertainment journalist with more than two decades of experience writing for dozens of print and online outlets, including Variety, The Hollywood Reporter, Rolling Stone and Fangoria.