Elton John: Fifty Years On: The Complete Guide to the Musical Genius of Elton John and Bernie Taupin (Paperback) 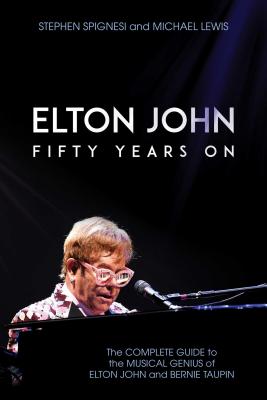 A great companion to ME, Elton's official autobiography!

Elton John is as big as they come…

the albums • the songs • the concerts • the musicals • the charities • the accolades • the costumes • the glasses • the music!

We can count on one hand the musical legends equal to Elton John (the Beatles and the Rolling Stones each get a finger).

Elton John: Fifty Years On looks at the impact songwriting partners Elton John and Bernie Taupin have had on popular music and culture, and also discusses every song on all thirty albums, plus his work on Broadway, in movies, and elsewhere.

Stephen Spignesi is a lecturer, bestselling author of more than sixty books, and world authority on the work of Stephen King, The Beatles, the Titanic and the US presidents. He is a retired Practitioner in Residence from the University of New Haven and his biography of John F. Kennedy Jr., J.F.K. Jr., was a New York Times bestseller. Spignesi appeared in the A&E Biography of Stephen King, the ITV biography of Robin Williams, and the E! biography of the Kennedys. He lives in New Haven, Connecticut, USA.

Michael Lewis is a long-time book editor, and author of twelve books including The 100 Best Beatles Songs (with Stephen Spignesi), A Guy Walks Into a Bar, and Outdated Advertising. He lives in Westwood, New Jersey, USA.