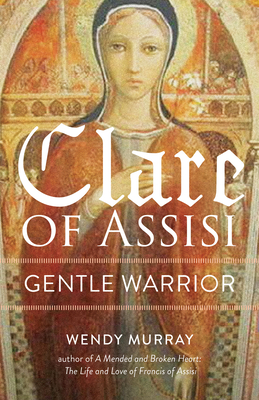 Clare of Assisi is generally known as “the female friend” of Saint Francis of Assisi and for centuries her legacy has remained obscured by his shadow. Yet Clare’s life and story ought to shine in its own light and on its own terms (her name, after all, means “light”). She is a figure of true heroism, tenacity, beatitude and grit who plotted her improbable course in the context of the raucous and explosive period of the Middle Ages. Much went wrong for Clare after the day when, as a teen, she fled the home of her noble and wealthy family to follow Francis in a life of poverty. No one would have begrudged her if, when the trials had become onerous, she had decided simply to “go home.” Yet she stayed the course, even after Francis had died. She pulled from the fire of her trials embers that would become her crown. In this new book, Wendy Murray digs deeply into Clare’s decision to abandon rank and wealth for allegiance to Christ (and in no small way, Francis) and explores the circumstances which, later on, tested Clare’s devotion. Clare’s curious and vivid spiritual vision galvanized her ability to persevere amid difficult circumstances and enabled her to stay her course and lay claim to a legacy that shines brightly among the host of medieval saints.

Wendy Murray is an award-winning writer and journalist. She lived in Assisi, Italy when completing A Mended and a Broken Heart: The Life and Love of Francis of Assisi and has spent more than a decade researching the lives of Francis and Clare. She is a former regional correspondent for Time magazine and associate editor for Christianity Today. She serves as adjunct professor of Communication Arts at Gordon College in Massachusetts.

“Oversimplification sells, but reality is messy. In Clare of Assisi, Wendy Murray chooses the more difficult but also the more rewarding path, as she did in her life of Saint Francis. She takes her readers along with her on a quest among fragmentary and often conflicting sources, piecing together the life of woman in a time and place radically different from our own—a woman whose passionate faith nevertheless has the power to inspire us today.”
—John Wilson, Contributing Editor, Englewood Review of Books

“This account of Clare's life befits her name, ‘Light;’ it illuminates a figure who has historically stood in her more-famous friend's shadow. Wendy Murray's presentation of Clare is neither adulatory nor cynical, but shows us a woman who dared great things and endured great difficulties, and became an example to women through the ages.” —Frederica Mathewes-Green, wide-ranging Eastern Orthodox author and speaker

"A fulfilling work meticulously documented for scholars yet accessible for anyone interested in a life of spirituality." —Library Journal
— Denise J. Stankovics