The Wandering Mind: What Medieval Monks Tell Us About Distraction (Hardcover) 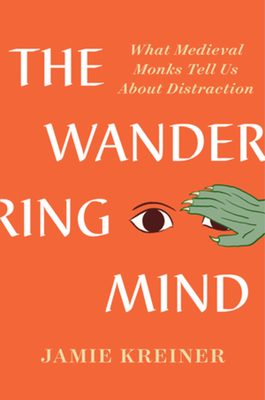 By Jamie Kreiner
$30.00
This title is out of stock indefinitely and not available to order.

A revelatory account of how Christian monks identified distraction as a fundamental challenge—and how their efforts to defeat it can inform ours, more than a millennium later.

The digital era is beset by distraction, and it feels like things are only getting worse. At times like these, the distant past beckons as a golden age of attention. We fantasize about escaping our screens. We dream of recapturing the quiet of a world with less noise. We imagine retreating into solitude and singlemindedness, almost like latter-day monks.

But although we think of early monks as master concentrators, a life of mindfulness did not, in fact, come to them easily. As historian Jamie Kreiner demonstrates in The Wandering Mind, their attempts to stretch the mind out to God—to continuously contemplate the divine order and its ethical requirements—were all-consuming, and their battles against distraction were never-ending. Delving into the experiences of early Christian monks living in the Middle East, around the Mediterranean, and throughout Europe from 300 to 900 CE, Kreiner shows that these men and women were obsessed with distraction in ways that seem remarkably modern. At the same time, she suggests that our own obsession is remarkably medieval. Ancient Greek and Roman intellectuals had sometimes complained about distraction, but it was early Christian monks who waged an all-out war against it. The stakes could not have been higher: they saw distraction as a matter of life and death.

Even though the world today is vastly different from the world of the early Middle Ages, we can still learn something about our own distractedness by looking closely at monks’ strenuous efforts to concentrate. Drawing on a trove of sources that the monks left behind, Kreiner reconstructs the techniques they devised in their lifelong quest to master their minds—from regimented work schedules and elaborative metacognitive exercises to physical regimens for hygiene, sleep, sex, and diet. She captures the fleeting moments of pure attentiveness that some monks managed to grasp, and the many times when monks struggled and failed and went back to the drawing board. Blending history and psychology, The Wandering Mind is a witty, illuminating account of human fallibility and ingenuity that bridges a distant era and our own.

Jamie Kreiner is professor of history at the University of Georgia. Her work has been awarded prizes from organizations such as the Medieval Academy of America and the American Society for Environmental History. She lives in Athens, Georgia.

[Kreiner is] a wry and wonderful writer. In 'The Wandering Mind,' she eschews nostalgia, rendering the past as it really was: riotously strange yet, when it comes to the problem of attention, annoyingly familiar . . . Kreiner is fascinating on the ways monks attempted to manipulate their memories and remake their minds, and on the urgency they brought to those tasks, knowing the dangers that lurked even if they eliminated all physical temptations.
— Casey Cep - New Yorker

A life of prayer and seclusion has never meant a life without distraction. As Jamie Kreiner puts it in her new book, 'The Wandering Mind,' the monks of late antiquity and the early Middle Ages (around A.D. 300 to 900) struggled mightily with attention....Charming. . . [Kreiner uses] the cultural obsession with distractibility to train our focus elsewhere, guiding us from the starting point of our own preoccupations to a greater understanding of how monks lived.
— Jennifer Szalai - New York Times

A lucid and vivid examination of how early Christian monks created habits of contemplation to 'connect their minds to God,' opening 'panoramic vistas of the universe that transcended both space and time.' Ms. Kreiner, a professor of medieval history at the University of Georgia, also shares intriguing perspectives on our own values and priorities....'The Wandering Mind' focuses on more than the past, and its implications demand our attention.
— Dominic Green - Wall Street Journal

As Kreiner elaborates in this smartly readable book, people who engage in exertions of concentration have likely been dealing with distraction forever.... the refined effort of attention was, as Kreiner winningly puts it, 'a paradox of states and scales,' seeking a broader vista by narrowing focus... This is ultimately an intensely inner struggle, and it’s a testament to Kreiner’s narrative skills that she manages to keep things so interesting . . . The Wandering Mind is an oddly cheering reminder that this persistence can yield results.

Unless you have phenomenal self-control, distraction is probably something that you’re contending with on a regular basis . . . Jamie Kreiner’s new book offers an unexpected point of reference for this nominally-modern condition: monks living hundreds of years ago. How they experienced and contended with distraction might surprise you; it could also be the key to a less distracted 2023.
— Tobias Carroll - InsideHook

Trying to eliminate distraction? Historian Kreiner looks in the archives at how medieval monks worked to find focus—and at what we can learn from them.
— People

Tackling the timeless theme of distraction, Kreiner, a professor of history at the University of Georgia, explores what the behavioral habits of medieval Christian monks can teach the modern world. . . [The Wandering Mind] uses a wide array of primary sources spanning the entirety of medieval Christendom, creating a pleasantly readable result. Good proof that the problem of distraction is nothing new.

University of Georgia history professor Kreiner (Legions of Pigs in the Early Medieval West) examines how medieval Christian monks dealt with distraction in this fascinating history . . . Meticulously detailed and surprisingly accessible, [The Wandering Mind] lends new insight into one of the oldest human preoccupations. Readers will be enlightened.

Kreiner is a scholar writing in plain English for a non-academic audience, delivering her findings with a light touch. Her book benefits from reaching beyond the usual historical preoccupation with Europe, venturing to Eastern Christian monasteries as far afield as Quatar, Iraq and Iran . . . By studying their accounts, Kreiner has discovered “a serious set of practices for cultivating awareness in a world in flux.
— Dave Luhrssen - Shepherd Express