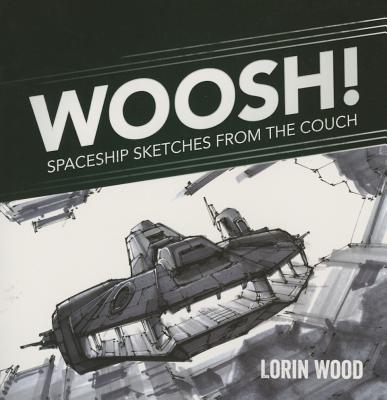 WOOSH is a collection of personal spaceship sketches created by entertainment designer Lorin Wood as he decompressed on his couch after a long day at work. While "analog" in its execution, there's nothing dated about his vision of the future. His detailed ships will have you dreaming of space exploration with every line and brushstroke. And artists, hobbyists, and anyone who enjoys sketching will also appreciate Wood's tips on what traditional tools to use and how to render.

Lorin Wood was raised in an extraordinarily creative home with family members who encouraged him to pursue the visual arts from his earliest years. His love of illustration and design was refined by copying his father's industrial design portfolio and getting a healthy dose of the work of Syd Mead, Joe Johnston, and Ralph McQuarrie, among others. Wood's passion for spaceships and robots led to a career as a conceptual designer that has spanned nearly two decades, working across multiple facets within the entertainment industry--from animation, visual effects, and previsualization, to product and installation design. Some of his film credits include 2008's The Day the Earth Stood Still for 20th Century Fox under legendary visual effects supervisor Jeffrey Okun, 2006's A Scanner Darkly by Richard Linklater for Warner Independent Pictures, and Unique, a film pitch with David Goyer at the Walt Disney Company. He also contributed to the video game Aliens: Colonial Marines for Sega and the popular Borderlands franchise at Gearbox Software, where he created the game's muse robot, Claptrap. Lorin Wood is the founder of the popular blog Nuthin' But Mech, which is also a popular book series featuring mech designs by some of the world's top concept artists and designers working in the industry today.