The Age of Genius: The Seventeenth Century and the Birth of the Modern Mind (Hardcover) 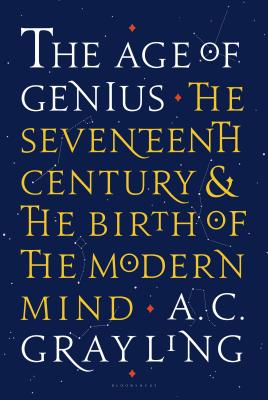 The Age of Genius explores the eventful intertwining of outward event and inner intellectual life to tell, in all its richness and depth, the story of the 17th century in Europe. It was a time of creativity unparalleled in history before or since, from science to the arts, from philosophy to politics. Acclaimed philosopher and historian A.C. Grayling points to three primary factors that led to the rise of vernacular (popular) languages in philosophy, theology, science, and literature; the rise of the individual as a general and not merely an aristocratic type; and the invention and application of instruments and measurement in the study of the natural world.

Grayling vividly reconstructs this unprecedented era and breathes new life into the major figures of the seventeenth century intelligentsia who span literature, music, science, art, and philosophy--Shakespeare, Monteverdi, Galileo, Rembrandt, Locke, Newton, Descartes, Vermeer, Hobbes, Milton, and Cervantes, among many more. During this century, a fundamentally new way of perceiving the world emerged as reason rose to prominence over tradition, and the rights of the individual took center stage in philosophy and politics, a paradigmatic shift that would define Western thought for centuries to come.

A. C. Grayling is Master of the New College of the Humanities, UK. He has written and edited numerous works of philosophy and is the author of biographies of Descartes and William Hazlitt. He believes that philosophy should take an active, useful role in society. He has been a regular contributor to The Times, Financial Times, Observer, Independent on Sunday, Economist, Literary Review, New Statesman and Prospect, and is a frequent and popular contributor to radio and television programmes, including Newsnight, Today, In Our Time, Start the Week and CNN news. He is a Fellow of the World Economic Forum at Davos, and advises on many committees ranging from Drug Testing at Work to human rights groups.

"Grayling does a fantastic job of proving his assertion that the 17th century saw a dramatic shift in Western thought. [A] highly engaging book." —Library Journal

"Grayling is a natural educator . . . He provides concise and helpful summaries of pertinent events and ideas." —The Spectator

"Grayling is a model of clarity . . . As a survey of the period, The Age of Genius is fascinating. Grayling is particularly good on the dissemination of ideas and the physical transmission of information around Europe . . . As an account of the development of ideas during one of the most exciting periods in Western history, The Age of Genius excels. Its scope is remarkable and it wears its learning lightly." —Literary Review

“A marvel, a 'distillation' of over a thousand authoritative texts, edited, redacted, and assembled in the manner of the (Holy) Bible, though by one man rather than many; written in a crisp, beautiful English.” —The New Yorker on THE GOOD BOOK

“You don't have to be a nonbeliever to find solace and wisdom in the distilled ideas presented here.” —Huffington Post on THE GOOD BOOK

“A probing, thoughtful meditation.” —Philadelphia Inquirer on AMONG THE DEAD CITIES

“Debunks the teleological, ontological and cosmological arguments employed throughout Christendom for the literal existence of God . . . Those looking for a succinct analysis of these centuries old debates will appreciate Grayling's insights.” —The Washington Post on THE GOD ARGUMENT

“Mr. Grayling is precise and incisive. He rattles through the standard arguments against the existence of God and does a capable job of demolishing those put forward in the hope of proving a deity's existence . . . His brand of humanism comes across as sensible, reasonable, and characterized by a generosity of spirit that is often absent from religious structures.” —The Economist on THE GOD ARGUMENT