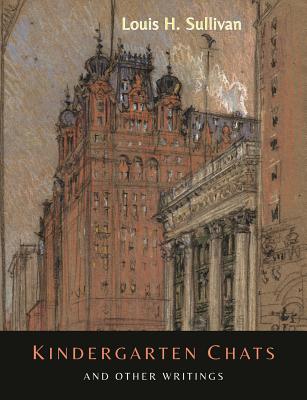 By Louis H. Sullivan
Email or call for price.
Usually Ships in 1-5 Days

2014 Reprint of 1947 Edition. Full facsimile of the original edition, not reproduced with Optical Recognition Software. Louis Henry Sullivan was one of the foremost American architects, and has been called the "father of skyscrapers" and "father of modernism". He is considered by many as the creator of the modern skyscraper, was an influential architect and critic of the Chicago School, was a mentor to Frank Lloyd Wright, and an inspiration to the Chicago group of architects who have come to be known as the Prairie School. Along with Henry Hobson Richardson and Wright, Sullivan is one of "the recognized trinity of American architecture". This collection of his writings includes other essays in additional to the book length "Kindergarten Chats." The are: Characteristics and Tendencies of American Architecture What is the Just Subordination, in Architectural Design, of Details to Mass? Ornament in Architecture Emotional Architecture as Compared to Intellectual The Tall Office Building Artistically Considered The Young Man in Architecture Education What is Architecture: A Study in the American People of Today.