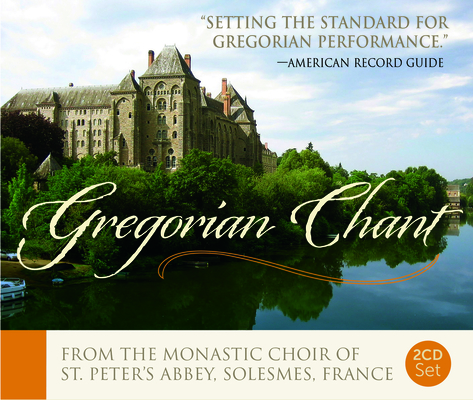 Since 1833, the research and study of Gregorian Chant by the Monks of the Abbey of St. Peter in Solesmes, France, has focused on making this sung form of prayer the finest possible offering for God, to whom it is addressed six times a day at the Abbey.

Each CD in this two-volume set, with chants from the 10th to the 17th centuries, contains the best of the Monks of Solesmes—including the Te Deum, Stabat Mater, Ave Maria, chants for the Liturgical Year from Advent to Pentecost, hymns from the service of Compline, chants devoted to Our Lady and the Blessed Sacrament, as well as the Mass of the Angels.

Each piece is taken from the Liber Cantualis and the corresponding reference number in the Cantualis is provided for each track, as well as the respective place in the service and/or liturgical calendar.

Sung in historical style, the chants on this disc are ideal for those who are familiar with the chant liturgy, as a collection of familiar melodies, as well as those wanting to become familiar with Gregorian chant.

The Recorded Legacy of Solesmes

Since the refounding of the monastery of St. Peter of Solesmes in 1833 under Dom Prosper Gueranger, this Benedictine monastery on the River Sarthe in western France has set the world standard both for the performance of Gregorian chant and the authenticity of the music itself. Commissioned by Pope Pius X to research the role of chant in liturgy and to edit books on chant that reflect this research, Solesmes enjoys an enviable reputation. Its work in liturgical reform and in the current revival of Gregorian chant has been likened to that of the great abbey of Cluny in the Middle Ages.

These recordings incorporate new understandings of ancient manuscripts and represent a distillation of nearly 200 years of scholarship in the chant: musical paleography, semiology, and modality. The groundbreaking work by the monks of Solesmes has contributed to today’s resurgence of interest in Gregorian chant as the foundation of Western music.

Paraclete Press is proud to be the North American distributor of the recordings of the monks of Solesmes. These recordings have won numerous prestigious international awards, including the Grand Prix du Disque, Deutsche Schallplatten Prize, Diapason d’Or, and the Edison Prize.

“The most famous and ‘authentic’ recordings of Gregorian chant for generations have been those made by the Solesmes monks.”      —The Boston Globe

“The music is utterly magnificent and the singing of this great choir is thrilling beyond words…it’s better to starve to this music than to live without it.”     —Classic CD

"The success of Gregorian chant in the past century, and the centered richness of prayer it brings to all of us, is almost singularly due to the herculean efforts of the Benedictine Monks of Solesmes, France."

"Communicates a mood of mystery, timelessness, peace, beauty, and contemplation."

"The Monks of Solesmes ... use the most authentic manuscripts and ancient documents to recover the original melodies."

"The chant is organic and text-based ... the singing is full and well-supported."

"There's something incredible fresh and new ... which is well worth your attention."

"The music is exceptionally inviting, engaging listeners' ears with beauty and elevating their thoughts no matter what their spiritual or religious beliefs and doctrines may be."

"The sensitive, careful, beautifully measured performances here can be used as an entry point to an earlier time."