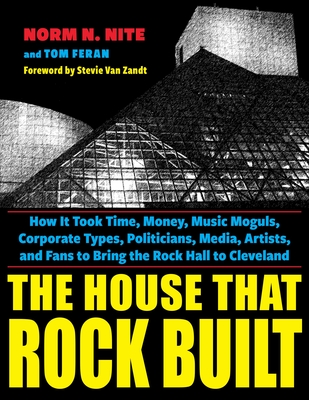 The behind-the-scenes battle for the Rock Hall

For 25 years, the Rock and Roll Hall of Fame has defined Cleveland's image as the "Rock and Roll Capital of the World." But while the Rock Hall has become an iconic landmark for the city of Cleveland and for fans of rock and roll around the world, it was just one missed phone call away from never being built in Cleveland. If the prominent singer and actress Lesley Gore hadn't contacted radio personality Norm N. Nite in August 1983, the Hall of Fame would not be in Cleveland--period.

Earlier that summer, Gore had learned that the newly formed Rock and Roll Hall of Fame Foundation was looking for a city to house their planned museum honoring the history of rock. Gore knew that a year earlier, Nite had pitched an idea for a similar museum, so she reached out to let him know that other figures in the music industry were working to turn his dream into a reality.

Nite immediately joined the project's Rules and Nominating Committee and spearheaded the campaign to bring the museum to Cleveland. At the time, the search committee was considering several other cities, including Memphis, Detroit, and New York, but Nite argued that the city's deep historical connection to rock music through Alan Freed and the Moondog Coronation Ball made Cleveland the perfect location. He began lobbying local and state politicians, fundraising with music moguls and civic leaders, and promoting the museum to the broader Cleveland public. As fans got involved, especially with their overwhelming response to a USA Today phone poll, Nite's campaign to bring the Hall to Cleveland was ultimately successful.

This book, told from Nite's insider perspective, draws on both first-person accounts and exclusive interviews with influential business leaders, government officials, and giants of the music industry. A detailed record of the Rock Hall's inception and creation, The House That Rock Built becomes a true tribute to the people who made it happen--through Herculean efforts--and to the music it celebrates.

Norm N. Nite is a legendary broadcaster, disc jockey, and impresario known by many as "Mr. Music" for his extensive knowledge of music history and popular culture. Nite hosted over half a dozen radio shows in New York and Cleveland during his six-decade-long career, including a SiriusXM radio show broadcast live from the Rock and Roll Hall of Fame. He has also chronicled the history of rock and roll music in his Rock On encyclopedias. Tom Feran is an award-winning journalist who worked as a writer and editor for the Cleveland Plain Dealer for 37 years. Beginning in 1982, Feran worked as the paper's features editor, TV critic, Sunday magazine editor, columnist, PolitiFact writer, assistant metro editor, and metro reporter. He was named Best Columnist in Ohio by the Society of Professional Journalists in 2007. Stevie Van Zandt is an American singer, songwriter, musician, producer, actor, and activist, best known as a member of Bruce Springsteen's E Street Band.