Deep Ellum: The Other Side of Dallas (John and Robin Dickson Series in Texas Music, sponsored by the Center for Texas Music History, Texas State University) (Paperback) 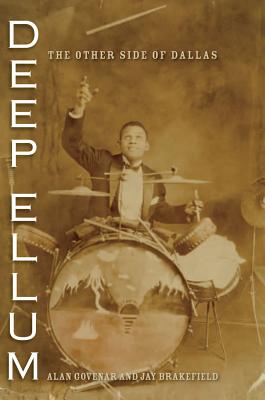 Deep Ellum, on the eastern edge of downtown Dallas, retains its character as an alternative to the city’s staid image with loft apartments, art galleries, nightclubs, and tattoo shops. It first sprang up as a ramshackle business district with saloons and variety theatres and evolved, during the early decades of the twentieth century, into a place where the black and white worlds of Dallas converged.

This book strips away layers of myth to illuminate the cultural milieu that spawned such seminal blues and jazz musicians as Blind Lemon Jefferson, Buster Smith, and T-Bone Walker and that was also an incubator for the growth of western swing.

Expanding upon the original 1998 publication, this Texas A&M University Press edition offers new research on Deep Ellum’s vital cross-fertilization of white and black musical styles, many additional rare historical photographs, and an updated account of the area in the early years of the twenty-first century.

ALAN GOVENAR is an author, folklorist, photographer, and filmmaker, living in Dallas. His recent titles include Everyday Music, Jasper, Texas: The Community Photographs of Alonzo Jordan, Lightnin’ Hopkins: His Life and Blues, and Texas Blues: The Rise of a Contemporary Sound. JAY BRAKEFIELD is a career journalist, freelance writer, and editor. He lives in Bryan, Texas.

“ . . . a welcome addition to collections supporting study of the blues and of the US Southwest.”—Choice

“An informative book about the neighborhood’s history . . .”—New York Times

“Govenar and Brakefield are to be commended for giving us a picture of a unique urban area . . . whose artistic influence and musical legacy contributed significantly to the cultural diversity of Dallas and all of north Texas.”—Mississippi Quarterly

"Deep Ellum is the contrast to "high-falutin" image Dallas seems to want to project as its identity. Today, Deep Ellum seems to be rebounding with residential developements, a new rail station, and reopening of new and old clubs. Deep Ellum is an excellent source of information about the area, [and] its entertainment history.." --Jerry Turner, The Mexia News
— Jerry Turner

"Updated with new and fascinating research & enriched by a comprehensive, helpful discography, Deep Ellum Blues: The Other Side of Dallas, is the definitive study of the history and the complex inter-racial musical cultures that developed and once flourished in this now unassuming, small section of East Dallas." Kip Lornell, Music department, George Washington University and co-author (With Charles Wolfe), The Life and Legend of Leadbelly.
— Kip Lornell

"The book is lavishly illustrated with photographs, record labels, and newspaper advertisements, all of which support an engaging text. What particularly justifies this second edition are the 50 pages of disciplined discography with labels, dates, and personnel of those 78 rpm discs from Brunswick, Columbia, Victor, and Vocalion that gave sonoric documentation to the work of so many individuals from earlier days who had connections with Dallas history." --D.R. de Lerma, Lawrence University
— D.R. de Lerma

"The wealth of historical photographs throughout make the book as much a pleasure to look at as to read, even if they don't always sit next to the relevant text. Deep Ellum  is a mixture of well documented, fine-grained history and engrossing detail. Govenar and Brakefield have written that rare book that will please scholars as well as music fans looking for a good read." — Texas Music
— Texas Music