Onward and Upward in the Garden (Paperback) 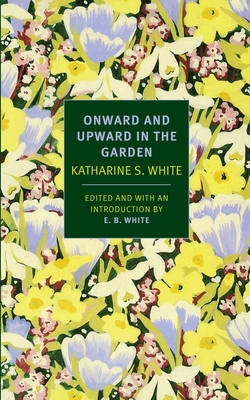 In 1925 Harold Ross hired Katharine Sergeant Angell as a manuscript reader for The New Yorker. Within months she became the magazine’s first fiction editor, discovering and championing the work of Vladimir Nabokov, John Updike, James Thurber, Marianne Moore, and her husband-to-be, E. B. White, among others. After years of cultivating fiction, White set her sights on a new genre: garden writing. On March 1, 1958, The New Yorker ran a column entitled “Onward and Upward in the Garden,” a critical review of garden catalogs, in which White extolled the writings of “seedmen and nurserymen,” those unsung authors who produced her “favorite reading matter.” Thirteen more columns followed, exploring the history and literature of gardens, flower arranging, herbalists, and developments in gardening. Two years after her death in 1977, E. B. White collected and published the series, with a fond introduction. The result is this sharp-eyed appreciation of the green world of growing things, of the aesthetic pleasures of gardens and garden writing, and of the dreams that gardens inspire.

Katharine S. White (1892–1977) was born in Winchester, Massachusetts, the youngest of three daughters. She attended Miss Winsor’s School and Bryn Mawr College, and in 1915 married Ernest Angell, with whom she had two children, Nancy and Roger. She became the first fiction editor at The New Yorker in 1925. Four years later, she met and, after separating from her first husband, married E.B. White, with whom she had one son, Joel. In the early 1930s the Whites bought a farmhouse in North Brooklin, Maine, and by the end of the decade they moved there from New York. White began writing garden pieces for The New Yorker in 1958, in the waning years of her long career as fiction editor, in which she exerted a profound influence on twentieth-century American literature. Onward and Upward in the Garden (1979) is her only book, edited and published posthumously by her husband E.B. White.

E.B. White (1899–1985) was the youngest of six children, born  in Mount Vernon, New York. He attended Cornell University, where he earned his lifelong nickname, Andy. He worked as a reporter and a copywriter before being recommended for a job at the newly founded New Yorker by the fiction editor Katharine Angell, who had read his submissions to the magazine. White became a regular contributor to The New Yorker in 1927, writing essays known for their humor and honesty. He was the author of three beloved children’s books, Stuart Little (1945), Charlotte’s Web (1952), and The Trumpet of the Swan (1970), and the co-author of Elements of Style (1959) with his former professor William Strunk Jr. In 1971 he received the National Medal for Literature. His masterful Here Is New York, considered one of the ten best books ever written about New York City, is available from The Little Bookroom.

“Her writing is so wonderfully clear, so intimate...she leaves you wanting to know her thoughts of every aspect of the garden.” —Jamaica Kincaid

“Onward and Upward in the Garden is quite a bit more than a book about flowers. It is itself a bouquet, the final blooming of an extraordinary sensibility.” —The New York Times

“You don’t have to be a gardener to love this collection of essays. White observes that a talent for the soil and a taste for writing and editorializing often go together, and she proves it—creating her own distinctive voice in the process.” —Newsweek

“[This collection] can be savored by the reader whose closest acquaintance with nature is the corner florist. It is a heady compost of observation, taste, wit, and scholarship.” —Time

“A special joy for persons of cultivation, be they connoisseurs of grandiflora or mere backyard tomato growers.” —Chicago Sun-Times

“A charming, idiosyncratic, opinionated, informative and, at times, humorous paean to the amateur pursuit of horticulture….it is the controlled discursiveness of the writing that keeps us reading, even if we don’t necessarily care about varieties of roses or the care and breeding of African violets. White reels us in with her enthusiasm and her Yankee directness. When she takes a narrative side trip through the history of the lawn mower or contemplates keeping the -virus-ridden bulbs of 'broken tulips' segregated in her flowerbeds, we find ourselves eagerly reading on—whether we have a lawn ourselves or give two figs about tulips….Katharine White was indeed a delightfully gifted writer.” —Robert Weibezahl, BookPage

“White’s critiques were quirky and precise, reflecting not only her preferences as a gardener, but her contention that these catalogs formed a literary genre of their own, their authors as singular as Hemingway or Faulkner. Looking back a half-century later, one finds White’s views alternately quaint, witty, sage – and surprisingly current…Notable throughout was her breadth of research, boundless curiosity and her candor. Yet the charm of these essays and their staying power derive from White herself.” —Joan Silverman, Portland Press Herald