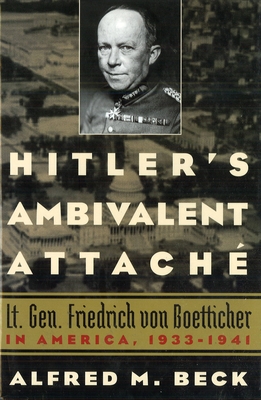 Friedrich von Boetticher was Germany’s only military attaché accredited to the United States between the world wars. As such, he was Germany’s official military observer in the capital of the nation whose potential as an ally of those powers arrayed against Adolf Hitler in the 1930s might have given the dictator pause in any predatory plans he harbored against his neighbors. Though von Boetticher produced a rich and detailed commentary on military and political affairs in Washington in the eight years prior to the outbreak of war between Germany and the United States in 1941, he was nonetheless accused after the war of misjudging America’s productive potential and misleading Hitler with overly optimistic reports. As Alfred M. Beck points out, what he actually told German authorities in Berlin is strikingly different from what his detractors later claimed. Von Boetticher “permits a glimpse into the sociology of a conservative officer caste at once assailed by the politics of a regime and the impossibilities imposed on it, its weaknesses in resisting its evils, and its eventual failure to present an alternative to National Socialism’s illusory attractions.”

A loyal German, von Boetticher had strong ties to America. His mother was American-born, he spoke English fluently, and he was enamored of American military history. He was also anti-Semitic and believed that “Jewish wire-pullers” had undue influence over the U.S. government and its policies. His professional ties to U.S. Army officers in the War Department were so strong—supplying them, for example, with details on German air strength and operations during the Battle of Britain in 1940—that they survived until August 1941 and long after the German ambassador himself had been recalled. Torn between his duty to Germany (though the Nazi regime had attempted to harm his son) and his deep affection for America, von Boetticher stood among the broad middle range of German officials who were neither perpetrator nor victim.

Alfred M. Beck, Ph.D., served over twenty-five years as a historian and publisher in various U.S. Department of Defense historical programs. He has published several major works that draw on his wide research experience in German archives, including The Corps of Engineers in the War Against Germany. He lives in Falls Church, Virginia.