The Boy from the Woods (Hardcover) 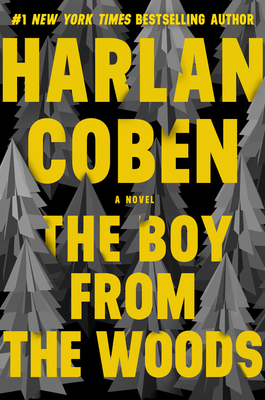 A man with a mysterious past must find a missing teenage girl in this shocking thriller from the #1 New York Times bestselling author of Run Away.

Thirty years ago, Wilde was found as a boy living feral in the woods, with no memory of his past. Now an adult, he still doesn't know where he comes from, and another child has gone missing.

No one seems to take Naomi Pine's disappearance seriously, not even her father—with one exception. Hester Crimstein, a television criminal attorney, knows through her grandson that Naomi was relentlessly bullied at school. Hester asks Wilde—with whom she shares a tragic connection—to use his unique skills to help find Naomi.

Wilde can't ignore an outcast in trouble, but in order to find Naomi he must venture back into the community where he has never fit in, a place where the powerful are protected even when they harbor secrets that could destroy the lives of millions . . . secrets that Wilde must uncover before it's too late.

Harlan Coben is a #1 NewYorkTimes bestselling author and one of the world's leading storytellers. His suspense novels are published in forty-five languages and have been number one bestsellers in more than a dozen countries, with seventy-five million books in print worldwide. His Myron Bolitar series has earned the Edgar, Shamus, and Anthony Awards, and many of his books have been developed into Netflix series, including his adaptation of TheStranger, headlined by Richard Armitage, and The Woods. He lives in New Jersey.

"The Boy from the Woods is as much an action as a psychological thriller, as much a riveting read as a superb character study in which Coben challenges himself by taking his story outside his suburban comfort zone. A must-read for any mystery or thriller fan."—Providence Journal

"The crafty Coben knows how to weave a compelling story with intriguing characters, and Wilde is one of his best . . . The narrative veers into such unexpected directions that even a true thriller aficionado will not see the multiple surprises the ending delivers." —Associated Press

"I liked [The Boy from the Woods] a lot!"—Stephen King

"Every time you think Harlan Coben couldn't get any better at uncoiling a whip snake of a page-turner, he comes along with a new novel that somehow surpasses its predecessor."—San Francisco Chronicle

"[Harlan Coben is] the modern master of the hook and twist."—Dan Brown

"Harlan's a great thriller writer . . . one of my favorites."—John Grisham

"Intense from the first page, with dramatic plot twists . . . Fans of complex heroes caught up in world-changing events will relish this latest from a master storyteller."—Library Journal, Starred Review

"The world needs to discover Harlan Coben. He's smart, he's funny and he has something to say."—Michael Connelly

"Count on Coben to serve up a once-you-start-you-can't-stop mystery/thriller. He introduces a new character that only he could pull off: a New Jersey version of Tarzan."—Forbes

"Coben is simply one of the all-time greats."—Gillian Flynn

"Introduces a compelling new series lead . . . another fantastic thriller from one of the best."—CrimeReads

"[Harlan Coben is] one of the world's finest thriller writers."—Peter James

"A gloriously pulpy premise . . . in the hands of a thriller master."—BookPage

"The Boy From the Woods is a one-sit read. The characters and plotlines are so well drawn out that it is easy to find yourself caught up inside them."—Bookreporter.com

"Coben is the undisputed king of suspense . . . jam-packed with misdirection and heart-stopping twists."—The Real Book Spy

"The bestselling author of . . . Run Away has written another gripping thriller for 2020."—AARP.org

"Coben finds room for three climactic surprises, one of them a honey."—Kirkus Reviews

"Harlan Coben is a master at weaving compelling thrillers . . . a haunting ride."—PopSugar

"There are lots of levels to this tale . . . Wilde is wild in a believable way and we want to know just what it is that keeps him going. As always, the women are great."—The Globe and Mail

"Entertaining . . . [a] read for the summer."—Winnipeg Free Press

"There may be no other thriller writer alive today who has mastered that fundamental trick of the genre. When you start a new Coben novel, or just pick one up and read the jacket copy, you know that nothing will unfold as it seems. You can be assured that surprises will keep appearing until the final page."—BookTrib

"Harlan Coben is a master at writing spellbinding thrillers, and his latest, The Boy From the Woods, is no exception . . . a wild ride."—Orange County Register

"The twists and turns of this story are really intriguing, and you don't suspect who the culprit is until the very end."—Self Magazine

"The Boy from the Woods is another superior tale from this popular author."—The Missourian

"Coben fans will instantly recognize the author's dry style, deft plotting, and adept use of twists and turns."—Intermountain Jewish News