Lily and the Night Creatures (Hardcover) 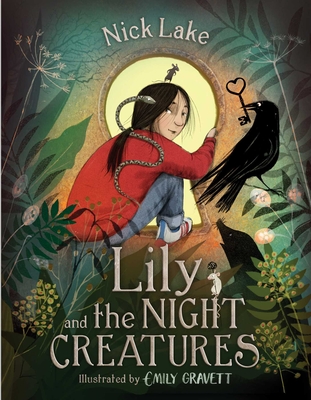 A young girl sets out to defeat the evil spirits inhabiting her home in this delightfully dark middle grade adventure perfect for fans of Coraline and Margaret Peterson Haddix’s The Strangers.

Lily is used to hospitals—she’s spent more time in them than out of them thanks to her recent health issues. But when her mother goes into labor, her parents drop her off at her grandmother’s house and rush to the hospital without her. Lily doesn’t want the new baby to replace her and she certainly doesn’t want to be sick anymore.

Most frustrating of all, she forgot to pack Willo, her favorite toy. Under her grandma’s not-so-watchful supervision, Lily sneaks back home to get Willo. Expecting to find an empty house, she is surprised to find her parents there. But something isn’t right... They look just like her mom and dad until she gets closer and sees their coal black eyes. And they refuse to let her in—it’s their house now.

With the help of some surprising new friends that she meets in her garden, Lily is determined to beat these shadowy replacements and be reunited with her real parents. But is she strong enough to triumph?

Nick Lake is a children’s book editor at Harper UK. He received his degree in English from Oxford University. His Blood Ninja trilogy was inspired by his interest in the Far East, and by the fact that he is secretly a vampire ninja himself. Nick lives with his wife and daughter in England. Visit him on Twitter @NickLakeAuthor.

Emily Gravett is the two-time winner of the Kate Greenaway Medal with Wolves and Little Mouse's Big Book of Fears.  Her internationally award-winning picture books include Meerkat Mail, Tidy and Old Hat.  She has illustrated bestselling fiction, including Matt Haig's Evie and the Animals and and a recent full-colour edition of Quidditch Through the Ages.

"An appealing tale of fortitude with just the right amounts of spookiness, playfulness, and heart."
— Booklist, starred review

"This story beautifully blends horror elements with animal fantasy and realistic issues. The replacement parents are creepy and reminiscent of those in Neil Gaiman’s Coraline, but there is plenty to differentiate the tales. The animals add humor and levity to the adventure, while Lily is believably frustrated with her sickness and scared that The Baby is taking over her place in the family. Gravett’s illustrations add to the magic and whimsy; they are particularly striking when showcasing the animals’ expressive features...[a]n appealing tale of fortitude with just the right amounts of spookiness, playfulness, and heart."