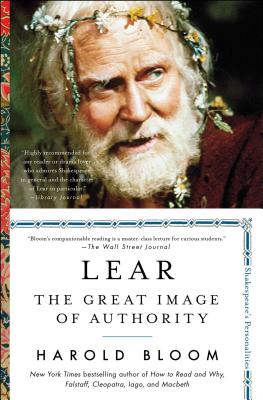 From one of the greatest Shakespeare scholars of our time, a beloved professor who has taught the Bard for over half a century—an intimate, wise, deeply compelling portrait of Lear, arguably Shakespeare’s most tragic and compelling character, the third in a series of five short books hailed as Harold Bloom’s “last love letter to the shaping spirit of his imagination” (The New York Times Book Review).

King Lear is one of the most famous and compelling characters in literature. The aged, abused monarch—a man in his eighties, like Bloom himself—is at once the consummate figure of authority and the classic example of the fall from grace and widely agreed to be Shakespeare’s most moving, tragic hero.

Award-winning writer and beloved professor Harold Bloom writes about Lear with wisdom, joy, exuberance, and compassion. He also explores his own personal relationship to the character: Just as we encounter one Anna Karenina or Jay Gatsby when we are seventeen and another when we are forty, Bloom writes about his shifting understanding—over the course of his own lifetime—of this endlessly compelling figure, so that the book also becomes an extraordinarily moving argument for literature as a path to and a measure of our humanity.

Bloom is mesmerizing in the classroom, wrestling with the often tragic choices Shakespeare’s characters make. Now he brings that insight to his “measured, thoughtful assessment of a key play in the Shakespeare canon” (Kirkus Reviews). “Lear is a “short, superb book that has a depth of observation acquired from a lifetime of study” (Publishers Weekly).

Harold Bloom is Sterling Professor of Humanities at Yale University. He has written more than sixty books, including Cleopatra: I Am Fire and Air, Falstaff: Give Me Life, The Western Canon, Shakespeare: The Invention of the Human, and How to Read and Why. He is a MacArthur Prize fellow, a member of the American Academy of Arts and Letters, and the recipient of many awards, including the Academy’s Gold Medal for Criticism. He lives in New Haven, Connecticut.

Praise for Lear: The Great Image of Authority

“At the outset of this pithy exegesis of King Lear, Bloom describes the play’s title characters as one of Shakespeare’s ‘most challenging personalities’…Bloom guides the reader scene by scene through the play, quoting long but well-chosen swaths of text and interjecting commentary that reveals the nuances of Shakespeare’s word choices…he is also deft at bringing out dramatic contrasts between characters…Bloom’s short, superb book has a depth of observation acquired from a lifetime of study, and the author knows when to let Shakespeare and his play speak for themselves.”—Publishers Weekly

"A measured, thoughtful assessment of a key play in the Shakespeare canon...Bloom brings this dark tale of a king in search of love to life via his incisive close reading of the text.”—Kirkus Reviews

“Highly recommended for any reader or drama lover who admires Shakespeare in general and the character of Lear in particular.”—Library Journal

“Read Bloom for literary escapism, and watch your back.” —Forward.com

Praise for Cleopatra: I Am Fire and Air

“Bloom draws upon his extensive reading to place the characters and the story in context alongside the histories from which the plot was adapted…those who have read the play or seen it performed will find Bloom’s passion to be infectious. Recommended for Shakespeare enthusiasts and readers seeking a deeper understanding of one of his greatest creations.” —Library Journal

“Bloom brings considerable expertise and his own unique voice to this book.”—Publishers Weekly

Praise for Falstaff: Give me Life

"Famed literary critic and Yale professor Bloom showcases his favorite Shakespearian character in this poignant work... He has created a larger-than-life portrait of a character who is 'at his best a giant image of human freedom.'"—Publishers Weekly

“[Bloom’s] last love letter to the shaping spirit of his imagination… An explanation and reiteration of why Falstaff matters to Bloom, and why Falstaff is one of literature’s vital forces… A pleasure to read.”—Jeanette Winterson, New York Times Book Review

"To read this book is to hear a powerful call to fall in love again with Shakespeare and his plays... I can think of no more engaging and nourishing pair of literary works: a drama of towering, perhaps unmatched, genius joining an exquisite work of literary criticism by a scholar of genuine greatness." —Baltimore Sun

"Brilliant... Will give you a night of full joy and make you forget current events." —Newsday

Praise for Shakespeare: The Invention of the Human

"Not perhaps since Samuel Johnson in the mid-eighteenth century has a critic explained to a general audience as ably as Mr. Bloom does how much Shakespeare matters to our sense of who we are." —The New York Times

"Should this be the one book you read if you're going to read a book about Shakespeare? Yes." —New York Observer

"Enraptured, incantatory... You could hardly ask for a more capacious, beneficent work." —The New Yorker