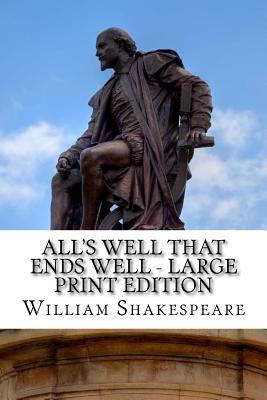 All's Well That Ends Well is a play by William Shakespeare. It is traditionally believed to have been written between 1604 and 1605, and was originally published in the First Folio in 1623. Though originally the play was classified as one of Shakespeare's comedies, the play is now considered by some critics to be one of his problem plays, so named because they cannot be neatly classified as tragedy or comedy. The play is based on a tale (3.9) of Boccaccio's The Decameron. Shakespeare may have read an English translation of the tale in William Painter's Palace of Pleasure. The name of the play expresses the proverb All's well that ends well, which means that problems do not matter so long as the outcome is good. There is no evidence that All's Well was popular in Shakespeare's own lifetime and it has remained one of his lesser-known plays ever since, in part due to its odd mixture of fairy tale logic, gender role reversals and cynical realism. Helena's love for the seemingly unlovable Bertram is difficult to explain on the page, but in performance it can be made acceptable by casting an actor of obvious physical attraction or by playing him as a naive and innocent figure not yet ready for love although, as both Helena and the audience can see, capable of emotional growth. This latter interpretation also assists at the point in the final scene in which Bertram suddenly switches from hatred to love in just one line. This is considered a particular problem for actors trained to admire psychological realism. However, some alternative readings emphasise the "if" in his equivocal promise: "If she, my liege, can make me know this clearly, I'll love her dearly, ever, ever dearly." Here, there has been no change of heart at all. Productions like the National Theatre's 2009 run, have Bertram make his promise seemingly normally, but then end the play hand-in-hand with Helena, staring out at the audience with a look of "aghast bewilderment" suggesting he only relented to save face in front of the King. Many critics consider that the truncated ending is a drawback, with Bertram's conversion so sudden. Various explanations have been given for this. There is (as always) possibly missing text. Some suggest that Bertram's conversion is meant to be sudden and magical in keeping with the 'clever wench performing tasks to win an unwilling higher born husband' theme of the play. Some consider that Bertram is not meant to be contemptible, merely a callow youth learning valuable lessons about values. Many directors have taken the view that when Shakespeare wrote a comedy, he did intend there to be a happy ending, and accordingly that is the way the concluding scene should be staged. Jonathan Miller in his acclaimed BBC version in 1981 had his Bertram (Ian Charleson) give Helena a tender kiss and speak wonderingly. It could be argued that the conditional phrasing of Bertram's surrender is possibly a comic reference to the earlier seemingly impossible tasks that he set Helena. Now he is promising to love her 'ever, ever dearly' if she fulfils the much simpler one of explaining how all this came about. Despite his outrageous actions, Bertram can come across as beguiling; sadly, the filming of the 1967 RSC performance with Ian Richardson as Bertram has been lost, but by various accounts (The New Cambridge Shakespeare, 2003 etc.) he managed to make Bertram sympathetic, even charming. Ian Charleson's Bertram was cold and egotistical but still attractive. Richard Monette's 1992 Bertram, David Snellgrove, was young and unformed. One character that has been admired is that of the old Countess of Rousillon, which Shaw thought "the most beautiful old woman's part ever written.