Einstein, Michael Jackson & Me: A Search for Soul in the Power Pits of Rock and Roll (Paperback) 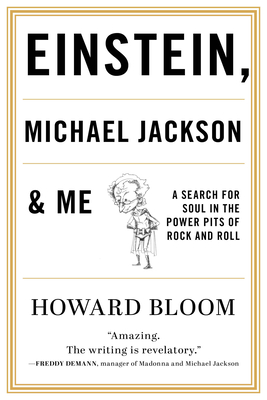 Howard Bloom-called "the greatest press agent that rock and roll has ever known" by Derek Sutton, the former manager of Styx, Ten Years After, and Jethro Tull-is a science nerd who knew nothing about popular music. But he founded the biggest PR firm in the music industry and helped build or sustain the careers of our biggest rock-and-roll legends, including Michael Jackson, Prince, Bob Marley, Bette Midler, Billy Joel, Billy Idol, Paul Simon, Peter Gabriel, David Byrne, AC/DC, Aerosmith, Queen, Kiss, Grandmaster Flash and the Furious Five, Run DMC, ZZ Top, Joan Jett, Chaka Khan, and one hundred more. What was he after? He was on a hunt for the gods inside of you and me. Einstein, Michael Jackson & Me is Bloom's story-the strange tale of a scientific expedition into the dark underbelly of science and fame where new myths and movements are made.

Based in Park Slope, Brooklyn, Howard Bloom has been called "next in a lineage of seminal thinkers that includes Newton, Darwin, Einstein, [and] Freud" by Britain's Channel 4 TV, and "the next Stephen Hawking" by Gear magazine. One of Bloom's seven books, Global Brain, was the subject of an Office of the Secretary of Defense symposium with participants from the State Department, the Energy Department, DARPA, IBM, and MIT.