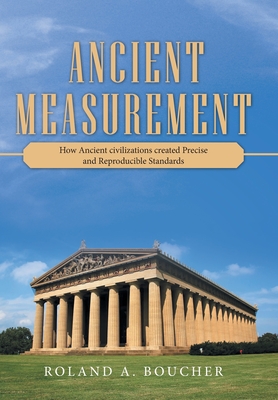 The Sumerians were not the only ones to create remarkably accurate standards of measurement in the Ancient world. Some would travel to the ends of the Earth, some would be with us still today.
Roland A. Boucher, a licensed professional engineer, examines incredible achievements of the past in this book that highlights standards of measure from the ancient Sumerians, Egyptians, Minoans, and others.
The Sumerians left two wonderful monuments which demonstrate their system of measurement.
The Great Pyramid at Giza, which was built to Sumerian standards with an error of only 185 parts per million; and
The Parthenon, in Athens, built 2000 years later to the same Sumerian standard.
Filled with tables, formulas, and images to promote the understanding of the mathematical concepts involved, this book celebrates the achievements of the Sumerians and other ancient civilizations.
Embark on a journey of discovery as the author recreates eight additional standards from the distant past.

Roland A. Boucher is a licensed professional engineer and former engineering program manager with the Hughes Aircraft Co. Space Division in California. He is the author of numerous technical articles in national journals. He began his study of ancient measurements in 2013 and has presented his findings in presentations at numerous national conferences. Mr. Boucher lives with his wife Nancy in Irvine California. They have two children, both in their fifties. Son John is a writer and Daughter Danielle is now a housewife having just retired from a supervisory position in the Healths and Human Services Department in Orange County CA Government. They have one grandchild, Catie 12 who is just starting middle school.