What ʿĪsā Ibn Hishām Told Us: Or, a Period of Time (Library of Arabic Literature #37) (Paperback) 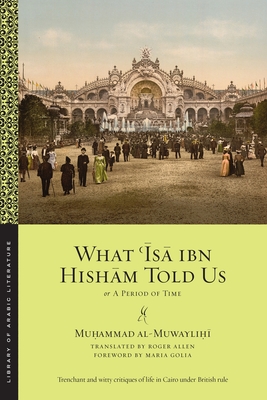 This is book number 37 in the Library of Arabic Literature series.

Trenchant and witty critiques of life in Cairo under British rule

What ʿĪsā ibn Hishām Told Us is a masterpiece of early twentieth-century Arabic prose. Penned by the Egyptian journalist Muḥammad al-Muwayliḥī, this highly original work was first introduced in serialized form in his family's pioneering newspaper Miṣbāḥ al-Sharq (Light of the East) and later published in book form in 1907. Widely hailed for its erudition and mordant wit, What ʿĪsā ibn Hishām Told Us was embraced by Egypt's burgeoning reading public and soon became required reading for generations of school students.

Bridging classical genres and modern Arabic fiction, What ʿĪsā ibn Hishām Told Us is divided into two parts. Sarcastic in tone and critical in outlook, the first part of the book relates the excursions of its narrator, ʿĪsā ibn Hishām, and his companion, the Pasha, through a rapidly westernizing Cairo and provides vivid commentary on a society negotiating--however imperfectly--the clash between traditional norms and imported cultural values. The second half takes the narrator to Paris to visit the Exposition Universelle of 1900, where al-Muwaylihi casts a critical eye on European society, modernity, and the role of Western imperialism as it ripples across the globe. Paving the way for the modern Arabic novel, What ʿĪsā ibn Hishām Told Us is invaluable both for its insight into colonial Egypt and its pioneering role in Arabic literary history. An English-only edition.

Muhammad al-Muwaylihi (Author) Muḥammad al-Muwayliḥī (1274-1348/1858-1930) was an Egyptian writer and political journalist, a career that he shared with his prominent father, Ibrāhīm al-Muwayliḥī, with whom he also published the reputable and incisive newspaper Miṣbāḥ al-Sharq (Light of the East). Other notable works include Critique of Shawqī's Collected Poems and Cure for the Soul. Maria Golia (Foreword by) Maria Golia is a Cairo-based journalist and the author of Cairo: City of Sand and Photography and Egypt. Roger Allen (Translator) Roger Allen retired in 2011 from his position as the Sascha Jane Patterson Harvie Professor at the University of Pennsylvania, where he served for forty-three years as Professor of Arabic and Comparative Literature. He is the author and translator of numerous publications on Arabic literature, modern fiction and drama, and language pedagogy.