A Physician on the Nile: A Description of Egypt and Journal of the Famine Years (Library of Arabic Literature #74) (Hardcover) 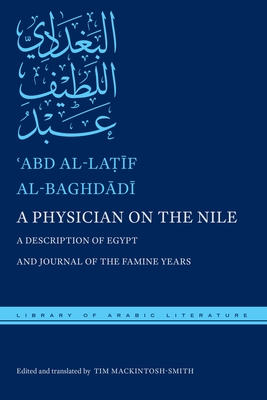 A Physician on the Nile begins as a description of everyday life in Egypt at the turn of the seventh/thirteenth century, before becoming a harrowing account of famine and pestilence. Written by the polymath and physician ʿAbd al-Laṭīf al-Baghdādī, and intended for the Abbasid caliph al-Nāṣir, the first part of the book offers detailed descriptions of Egypt's geography, plants, animals, and local cuisine, including a recipe for a giant picnic pie made with three entire roast lambs and dozens of chickens. ʿAbd al-Laṭīf's text is also a pioneering work of ancient Egyptology, with detailed observations of Pharaonic monuments, sculptures, and mummies. An early and ardent champion of archaeological conservation, ʿAbd al-Laṭīf condemns the vandalism wrought by tomb-robbers and notes with distaste that Egyptian grocers price their goods with labels written on recycled mummy-wrappings. The book's second half relates his horrific eyewitness account of the great famine that afflicted Egypt in the years 597-598/1200-1202. ʿAbd al-Laṭīf was a keen observer of humanity, and he offers vivid first-hand depictions of starvation, cannibalism, and a society in moral free-fall. A Physician on the Nile contains great diversity in a small compass, distinguished by the acute, humane, and ever-curious mind of its author. It is rare to be able to hear the voice of such a man responding so directly to novelty, beauty, and tragedy. A bilingual Arabic-English edition.

ʿAbd al-Laṭīf al-Baghdādī (Author) ʿAbd al-Laṭīf al-Baghdādī (557-629/1162-1231) was a Baghdad-born physician and scientist who wrote books on a wide range of topics, including medicine, philology, mathematics, and philosophy. Tim Mackintosh-Smith (Edited and Translated by) Tim Mackintosh-Smith is a noted British travel author, best known for his trilogy on the renowned Moroccan world-traveler Ibn Baṭṭūṭah, which earned him a spot among Newsweek's top twelve travel writers of the past hundred years. Since 1982, he has lived in Sanaa, Yemen.