My Sand Life, My Pebble Life: A memoir of a childhood and the sea (Hardcover) 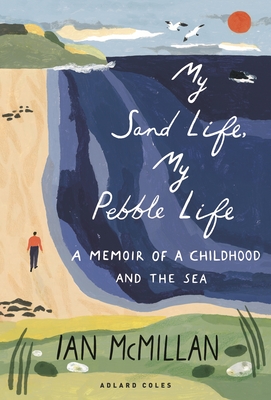 Warm and darkly funny, this sublimely crafted book transports you (in a blue Ford Zephyr, with an AA route map, a granny in the back and a bingo hall on the horizon) to the world of childhoods by the sea. Specifically, Ian's memories of childhood: ones we'll all identify with – endless sunny days on the beach, done to a turn fish and chips, legendary games of cricket, tea and cakes and family crammed into a tiny caravan, holiday cottages that live forever, buckets of shells, a busted fishing net and enough sand to make a beach, with the tide out, way out…

In this nostalgic collection of reminiscences (with the odd poem thrown in) journey with Ian as he walks barefoot to the sea to see the sun rise. He is attacked by seagulls, and midges, and wasps. He eats a lot of fish and chips and it's always the best yet. He nearly avoids a frisbee. He searches for jazz in Scarborough. He walks. He even tries to run. But mostly he savours the sea and our seaside moments and our seaside dreams.

If you want a shot of salty sea air, a tussle with a seagull and the congenial companionship of someone described as 'relentlessly jolly' (The Guardian), this will be a joyous and moving read.

Ian McMillan is a poet, journalist, playwright and broadcaster. He's written comedy for radio and plays for the stage, and worked extensively in radio and television. He currently presents The Verb on BBC Radio 3 and appears as a regular on Coast, BBC Breakfast, Countryfile, Pick of the Week, Last Word and The Arts Show.

With the Times Education Supplement describing him as 'the Shirley Bassey of performance poetry' and Andy Kershaw saying 'he's inching towards the status of a National Treasure', he's been a castaway on Desert Island Discs, poet in residence for The Academy of Urbanism and Barnsley FC, resident poet at English National Opera and UK Trade & Investment poet, Yorkshire TV's Investigative Poet and Humberside Police's Beat poet.