Lessons from the Sand: Family-Friendly Science Activities You Can Do on a Carolina Beach (Southern Gateways Guides) (Paperback) 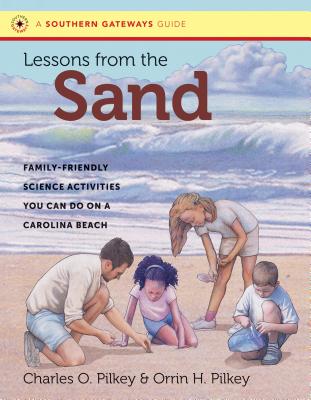 Ever wonder where sand comes from? Or why shells are colored differently? Or how to estimate the size of a wave? Featuring more than forty fun hands-on activities for families with children, Lessons from the Sand reveals the science behind the amazing natural wonders found on the beaches of North Carolina and South Carolina. Easy-to-do experiments will help parents and kids discover the ways water, wind, sand, plants, animals, and people interact to shape the constantly changing beaches we love to visit.

Featuring colorful illustrations and clear instructions, most activities require nothing more than an observant eye and simple tools found at local stores. You will learn about geology, weather, waves and currents, the critters that live on our beaches, and the environmental issues that threaten them. Chapters also include indoor activities for rainy days and activities for nighttime discovery. This book will become an indispensable companion for families, teachers, and students heading to the Carolina coast for years to come.

Charles Pilkey began his career as a geologist working for an oil company out of Abilene, Texas, an episode he refers to as his Babylonian captivity. By good fortune, he was able to escape by sailing away on a thirty-two-foot sloop, on which he lived for several years, feasting on fish and lobster and seasonally migrating with the birds up and down the East Coast. Like every sailor, he became a lover of the sea for its otherworldly beauty and a hater of the sea for its savage indifference. Eventually, Charles sold his boat and went back to school to study art. He became a roving sculptor, visiting seven continents and fifty-two countries (including a fourteen-year stint in Japan). The fruits of his travels can be seen in museums and parks and on college campuses in China, Japan, Korea, Italy, Turkey, and the United States. Orrin Pilkey grew up in eastern Washington State, on the desert side of the mountains. He was very much oriented to the outdoors through fishing, hunting, hiking, canoeing, and even firefighting as a smoke jumper out of Missoula, Montana. Orrin never saw the ocean until he waded into the frigid waters of Puget Sound as a teenager. Like many others who grew up away from the sea, he became fascinated with it and studied oceanography in college. During the first twenty years after graduation, he spent more than a year in total studying the floor of the deep sea. When his parent's house was severely damaged by Hurricane Camille, he realized the sea's true power and decided to trade studying the deep for exploring shorelines. Today, after visiting beaches on all seven continents, Pilkey finds the subject of beaches and how they work more captivating than ever.