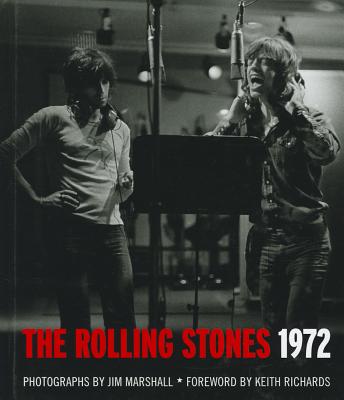 By Jim Marshall (Photographs by), Keith Richards (Foreword by)
Email or call for price.
Hard to Find

In 1972, the Rolling Stones marked their first decade as a band with the release of Exile on Main St. and a summer concert tour of America that set new standards for magnificence in live performance. Covering the tour for Life magazine, photographer Jim Marshall captured indelible moments of the Stones in their glory onstage, as well as the camaraderie behind the scenes. Featuring a foreword by Keith Richards, this volume presents Marshall's shots alongside dozens of never-before-seen frames. Stones fans celebrating their fiftieth anniversary will revel in this unprecedented look at one of the biggest rock bands of all time from the photographer who captured them best.

Jim Marshall (1936–2010) was one of the pioneers of music photojournalism.

Keith Richards is a founding member of the Rolling Stones.

"The Rolling Stones turn 50 this year and with it come the box sets, DVDs and books- what the heck, its their birthday after all. Although the band continues more as the worlds greatest Stones tribute band these days, one can remember the era when the Stones mattered- and 1972 may well have been their apex. Touring the United States upon the release of "Exile", the Stones changed rock music and in turn America forever. And Jim Marshall was there, camera at the ready. From the studios in Los Angeles to the stages of Winterland and Madison Square Garden Marshall had access to the inner workings of this history-shaping era. These were the days before videos, where a single shot in "Creem" or "Life" captured the mystery beyond the lens, a single glimpse at a life alien to yours. It's only rock and roll- and the Stones helped invent it, 40 years ago." -
The Big Takeover—-

"The Rolling Stones' 1972 American tour was bigger than anything that had come before it. [Jim] Marshall, who covered the tour for Life magazine, got complete access to the band, and the stunning images in this collection show the Stones in all their strung-out Exile on Main Street-era splendor-- recording in Los Angeles, chilling backstage and strutting across some very lucky concert stages."
-Rolling Stone magazine—-