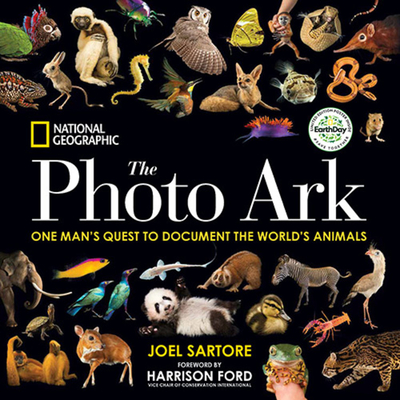 By Joel Sartore, Harrison Ford (Foreword by)
$35.00
This title is out of stock indefinitely and not available to order.

JOEL SARTORE is a photographer, author, and 30-year contributor to National Geographic magazine, named 2018 National Geographic Explorer of the Year. Through his National Geographic Photo Ark project, he plans to photograph every species of animal under human care, an estimated 12,000. (As of Jan 2020, he has photographed more than 9,800.) A three-part PBS/Nova special, "Rare," featured his project in 2017. His "Fundamentals of Photography" is the best-selling offering of all The Great Courses, and he is a frequent guest on CBS Sunday Morning.
HARRISON FORD is an American actor and film producer. He gained worldwide fame for his starring roles as Han Solo in the original Star Wars epic space opera trilogy and the title character of the Indiana Jones film series.
DOUGLAS CHADWICK has reported on wildlife around the world, from right whales in the subantarctic to snow leopards in the Himalayas, producing close to 50 articles for National Geographic magazine. He has written 13 books about wildlife and conservation, including several focused on the Rocky Mountains.