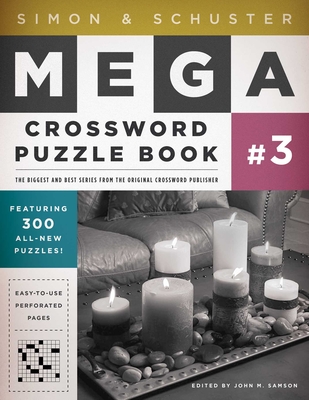 This is book number 3 in the S&S Mega Crossword Puzzles series.

The Best Crosswords Around!

With 300 Brand-new Puzzles to Solve

In 1924, Simon & Schuster published its first title, The Cross Word Puzzle Book. Not only was it the publisher's first release -- it was the first collection of crossword puzzles ever printed.

Today, more than eighty years later, the legendary Simon & Schuster Crossword Puzzle Book series maintains its status as the standard-bearer for cruciverbal excellence. This series continues to provide the most challenging, fresh, and original puzzles on the market. Created by the best contemporary constructors -- and edited by top puzzle master John M. Samson -- these Thursday to Sunday-size brain breakers offer hours of stimulation for solvers of every level.

With hundreds of puzzles in one volume, the Simon & Schuster Crossword Puzzle Book series will continue to test the knowledge of solvers everywhere.

Can you avoid turning to the answer key? Sharpen your pencils, grit your teeth, and find out!

John M. Samson is an expert crossword puzzle constructor and editor. His crosswords have been published in leading magazines and newspapers across the country, including The New York Times. He lives in upstate New York. John’s favorite published crossword is his three-page centerfold for Golf Digest featuring pictures of past US Open winners. John’s puzzles have appeared in unconventional settings: on cereal boxes, a rock band’s album cover, and the side of a three-story brick building. A jigsaw puzzle for US Congress members, a crossword in the shape of the H. J. Heinz keystone logo, and another in the shape of an Absolut Vodka bottle were memorable design challenges. John has been honored to construct special birthday puzzles for Lee Iacocca, F. Lee Bailey, Ed Ruscha, Keith Hernandez, Frank Sinatra, James Stewart, and Harry Connick Jr., and framed fan letters from Stephen King and Frank Sinatra hang proudly in his upstate New York office.