The Demon Under the Microscope: From Battlefield Hospitals to Nazi Labs, One Doctor's Heroic Search for the World's First Miracle Drug (Paperback) 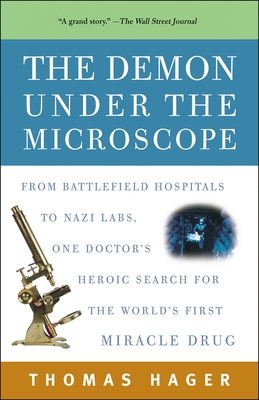 In The Demon Under the Microscope, Thomas Hager chronicles the dramatic history of sulfa, the first antibiotic and the drug that shaped modern medicine.

The Nazis discovered it. The Allies won the war with it. It conquered diseases, changed laws, and single-handedly launched the era of antibiotics. Sulfa saved millions of lives—among them those of Winston Churchill and Franklin Delano Roosevelt Jr.—but its real effects are even more far reaching. Sulfa changed the way new drugs were developed, approved, and sold; transformed the way doctors treated patients; and ushered in the era of modern medicine. The very concept that chemicals created in a lab could cure disease revolutionized medicine, taking it from the treatment of symptoms and discomfort to the eradication of the root cause of illness.

A strange and colorful story, The Demon Under the Microscope illuminates the vivid characters, corporate strategy, individual idealism, careful planning, lucky breaks, cynicism, heroism, greed, hard work, and the central (though mistaken) idea that brought sulfa to the world. This is a fascinating scientific tale with all the excitement and intrigue of a great suspense novel.

Veteran science and medical writer Thomas Hager is the author of three books, including Force of Nature: The Life of Linus Pauling, and his work has appeared in publications ranging from Reader’s Digest to Medical Tribune. A former director of the University of Oregon Press, contributing editor to American Health, and correspondent for the Journal of the American Medical Association, he lives in Eugene, Oregon.

“Fascinating . . . A rousing, valuable contribution to the history of medicine.”
—Kirkus Reviews (starred)

"This is a grand story, and Mr. Hager tells it well...one can easily imagine 'The Demon Under the Microscope,' like 'Microbe Hunters' before it, inspiring in young, idealistic readers the enthusiasm for medical research and the zeal for healing that generates great physicians."
—Wall Street Journal

"Surprisingly entertaining...[Hager's] enthusiasm for the search for a 'magic bullet' drug in the early 20th century is infectious. He convincingly credits sulfa drugs for some of the most revolutionary and catastrophic moments in medicine. And anecdotes about famous people affected—from Calvin Coolidge to Eleanor Roosevelt—are narrative spoonfuls of sugar."
—Entertainment Weekly

"Hager, a biographer of Linus Pauling, does a remarkable job of transforming material fit for a graduate biology seminar into highly entertaining reading. He knows that lay readers need plenty of personality and local color, and his story is rich with both. This yarn prefigures the modern rush for corporate pharma patents; it is testament to Hager's skills that the inherently unsexy process of finding the chemicals that might help conquer strep is as exciting an account of the hunt for a Russian submarine."
—Publishers Weekly