Character: The History of a Cultural Obsession (Paperback) 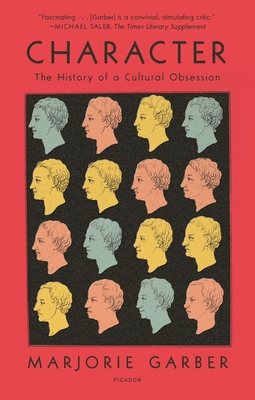 A spirited, engaging investigation into the concept of character, an enduring human obsession in literature, psychology, politics, and everyday life.

Since at least Aristotle’s time, philosophers, theologians, moralists, artists, and scientists have pondered the enigma of human character. In its oldest usage, “character” derives from a word for engraving or stamping, yet over time, it has come to mean a moral idea, a type, a literary persona, and a physical or physiological manifestation observable in works of art and scientific experiments. It is an essential term in drama and the focus of self-help books.

In Character: The History of a Cultural Obsession, Marjorie Garber points out that character seems more relevant than ever today, omnipresent in discussions of politics, ethics, gender, morality, and the psyche. References to character flaws, character issues, and character assassination and allegations of “bad” and “good” character are inescapable in the media and in contemporary political debates. What connection does “character” in this moral or ethical sense have with the concept of a character in a novel or a play? Do our notions about fictional characters catalyze our ideas about moral character? Can character be “formed” or taught in schools, in scouting, in the home? From Plutarch to John Stuart Mill, from Shakespeare to Darwin, from Theophrastus to Freud, from nineteenth-century phrenology to twenty-first-century brain scans, the search for the sources and components of human character still preoccupies us.

Today, with the meaning and the value of this term in question, no issue is more important, and no topic more vital, surprising, and fascinating. With her distinctive verve, humor, and vast erudition, Marjorie Garber explores the stakes of these conflations, confusions, and heritages, from ancient Greece to the present day.

Marjorie Garber is the William R. Kenan, Jr., Professor of English and of Visual and Environmental Studies at Harvard University. She is the author of several books on Shakespeare, including Shakespeare’s Ghost Writers and Shakespeare After All, as well as of books on cultural topics ranging from dogs and real estate to cross-dressing, bisexuality, the use and abuse of literature, and the place of the arts in academic life. A member of the American Philosophical Society, she was the recipient of a 2019 Guggenheim Fellowship.

“Can an examination of the single word ‘character’ sustain a book of 383 pages and another 40-odd pages of endnotes? Turns out it can, and does so brilliantly in Marjorie Garber’s magisterial book. . . . Scholarly by training and savvy by instinct, she writes without any of the dampening jargon now common in academic prose and with an impressive respect for the complexity of her subject.” —Joseph Epstein, The Wall Street Journal

“Absorbing . . . The strength of Garber’s book . . . [lies] in her wide-ranging account of how we arrived at the confused and confusing things [character] has meant and means now. . . . The richness of this history is what makes Garber's book fascinating.” —Brian Dillon, Harper’s

“In her wide-ranging cultural history of the term [‘character’], Marjorie Garber wonders if it is merely ‘a quaint survival from a more naïve, more ethical, or at least less brazen past.’ Yet this noted Shakespeare scholar demonstrates that the term remains a prominent point of reference today . . . Garber has unearthed fascinating material and is a convivial, stimulating critic.” —Michael Saler, The Times Literary Supplement

"Encyclopedic, eclectic, and swift moving . . . Character explores not only the linguistic and ethical but also the sociological, psychological, scientific, and pseudoscientific dimensions of its subject . . . Garber is especially good on the intersection of character and gender, in particular on the relationship traditionally asserted between the cultivation of character and ideas of masculine honor." —Elizabeth D. Samet, The American Scholar

"Hectic and absorbing . . . Garber is at her most fluent and thorough . . . [as she] draws out how the ideology of empire infused the philosophy of the Boy Scouts — to tame oneself before taming the world." —Parul Sehgal, The New York Times Book Review

“While sophisticated and filled to the brim with academic references, Garber’s book effectively makes the content accessible and interesting. Character exemplifies Garber’s many areas of expertise, interacting well with other works to ultimately leave readers with a clarified perspective and new method of analyzing the complicated workings of society.” —Nina M. Foster, The Harvard Crimson

"Intriguing and informative . . . Garber is skilled at drawing connections between different cultural moments; for instance, she connects modern—and, to her, flawed—efforts to map character through brain scans with the 19th-century pseudoscience of phrenology. While Garber leaves her discussion open-ended, her information-rich book will be helpful to readers in highlighting how a concern with character has been central to modern life." —Publishers Weekly

“What is the relation between having character and being a character, or between character and personality? In this immensely wide-ranging exploration of the notion of character in all its varieties, from the Greeks to Brett Kavanaugh and President Trump, Marjorie Garber shows herself to be our most engaging and perspicuous cultural critic, with fascinating evidence about questions that are crucial to our ways of thinking about human values." —Jonathan Culler, Class of 1916 Chair of English and Comparative Literature, Cornell University