Cobalt Red: How the Blood of the Congo Powers Our Lives (Hardcover) 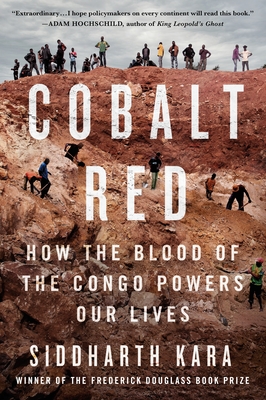 An unflinching investigation reveals the human rights abuses behind the Congo’s cobalt mining operation—and the moral implications that affect us all.

Cobalt Red is the searing, first-ever exposé of the immense toll taken on the people and environment of the Democratic Republic of the Congo by cobalt mining, as told through the testimonies of the Congolese people themselves. Activist and researcher Siddharth Kara has traveled deep into cobalt territory to document the testimonies of the people living, working, and dying for cobalt. To uncover the truth about brutal mining practices, Kara investigated militia-controlled mining areas, traced the supply chain of child-mined cobalt from toxic pit to consumer-facing tech giants, and gathered shocking testimonies of people who endure immense suffering and even die mining cobalt.

Cobalt is an essential component to every lithium-ion rechargeable battery made today, the batteries that power our smartphones, tablets, laptops, and electric vehicles. Roughly 75 percent of the world’s supply of cobalt is mined in the Congo, often by peasants and children in sub-human conditions. Billions of people in the world cannot conduct their daily lives without participating in a human rights and environmental catastrophe in the Congo. In this stark and crucial book, Kara argues that we must all care about what is happening in the Congo—because we are all implicated.

SIDDHARTH KARA is an author, researcher, and activist on modern slavery. He is a British Academy Global Professor and an Associate Professor of Human Trafficking and Modern Slavery at Nottingham University. Kara has authored three books on modern slavery and won the Frederick Douglass Book Prize. Kara's first book was adapted into a Hollywood film, Trafficked. A feature film inspired by Cobalt Red is currently in preproduction. He divides his time between the U.K. and the US.

“With extraordinary tenacity and compassion, Siddharth Kara evokes one of the most dramatic divides between wealth and poverty in the world today. His reporting on how the dangerous, ill-paid labor of Congo children provides a mineral essential to our cellphones will break your heart. I hope policy-makers on every continent will read this book.” — Adam Hochschild, author of King Leopold's Ghost

"Cobalt Red is a riveting, eye-opening, terribly important book that sheds light on a vast ongoing catastrophe. Everyone who uses a smartphone, an electric vehicle, or anything else powered by rechargeable batteries needs to read what Siddharth Kara has uncovered." — Jon Krakauer, author of Into Thin Air

"Meticulously researched and brilliantly written by Siddharth Kara, Cobalt Red documents the frenzied scramble for cobalt and the exploitation of the poorest people in the Democratic Republic of the Congo.”
— Baroness Arminka Helic, House of Lords, UK

"Siddharth Kara's powerfully told and meticulously researched book exposes the dirty secret that much of our 'clean' energy is powered by the violent exploitation, and blood, of children in the Congo. He makes a compelling case for the urgent need to address this modern form of slavery. " — Nick Grono, CEO, Freedom Fund

"As the world continues to embrace the net zero agenda and becomes ever more dependent on personal electronic devices and new technologies, this compelling book paints a dire portrait of the conditions under which a crucial natural resource is extracted. Drawing on multiple field missions and first-hand accounts of the process of cobalt mining in the Democratic Republic of Congo, Siddharth Kara shows in vivid detail not only life on the ground and the true human cost of extraction, but also the gross inequalities built into global value chains and business models that underpin this industry. This account reinforces our understanding of the interdependent and mutually reinforcing nature of all human rights and the many negative externalities of our modern global economy." — Todd Landman, Professor of Political Science, Pro Vice Chancellor of the Faculty of Social Sciences, and Executive Director of the Rights Lab at the University of Nottingham

"Kara, who traveled the country, entering mines and speaking to workers at every level of the labor chain, exposes slavery, child labor, forced labor, and other ongoing horrors and crimes. Extensively researched, this piercing narrative is muckraking journalism at its finest. " — Booklist, STARRED review

“Readers will be outraged and empowered to call for change.” – Publishers Weekly STARRED review

Praise for Modern Slavery
"While many in this fight are sympathetic to the suffering, Kara not only brings true expertise, he brings true empathy. Read this book to immerse yourself in both." -- Jean Baderschneider, CEO, Global Fund to End Modern Slavery

"A must-read for all those concerned about human rights and labor exploitation." -- Urmila Bhoola, United Nations Special Rapporteur on Contemporary Forms of Slavery