The Tudors in Love: Passion and Politics in the Age of England's Most Famous Dynasty (Hardcover) 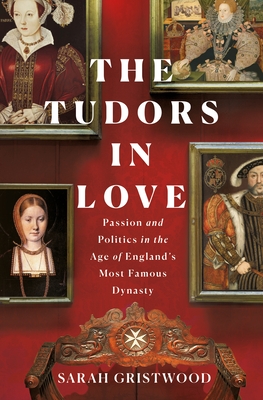 Sarah Gristwood's The Tudors in Love offers a brilliant history of the Tudor dynasty, showing how the rules of romantic courtly love irrevocably shaped the politics and international diplomacy of the period.

Why did Henry VIII marry six times? Why did Anne Boleyn have to die? Why did Elizabeth I's courtiers hail her as a goddess come to earth?

The dramas of courtly love have captivated centuries of readers and dreamers. Yet too often they're dismissed as something existing only in books and song--those old legends of King Arthur and chivalric fantasy.

Not so. In this ground-breaking history, Sarah Gristwood reveals the way courtly love made and marred the Tudor dynasty. From Henry VIII declaring himself as the ‘loyal and most assured servant' of Anne Boleyn to the poems lavished on Elizabeth I by her suitors, the Tudors re-enacted the roles of the devoted lovers and capricious mistresses first laid out in the romances of medieval literature. The Tudors in Love dissects the codes of love, desire and power, unveiling romantic obsessions that have shaped the history of the world.

Sarah Gristwood is the author of several previous books of fifteenth and sixteenth-century history, including Game of Queens: The Women Who Made Sixteenth-Century Europe, and Blood Sisters: the Women Behind the Wars of the Roses. Her Arbella: England’s Lost Queen and Elizabeth and Leicester both featured on the bestseller lists, and Sarah has also written a number of books on twentieth-century figures from Winston Churchill to Elizabeth II.

A former film journalist contributing to the Guardian, The Times, and the Telegraph, she now broadcasts regularly for Sky News, CNN and the BBC on royal and historical affairs, besides contributing to a number of documentary series such as Royal House of Windsor and Secrets of the National Trust. A graduate of Oxford University, she is a Fellow of the Royal Historical Society and of the RSA, who has been shortlisted for both the Marsh Biography Award and the Ben Pimlott Prize for Political Writing.

"Compelling…Gristwood's prism of courtly love is smashed by the cruelty of power politics and we get the gripping—and heartbreaking—story of trapped royal women over more than a century." –New York Times Book Review, Cover Review

“Gristwood’s prose is as seductive as the subject matter. Be prepared to fall in love.” –Wall Street Journal

“An engrossing look at how the Tudor dynasty employed the ‘stylish and stylised game’ of courtly love…fascinating incidental details add insight and reveal personal connections between historical figures. The result is a fresh and tantalizing look at a much-scrutinized dynasty.” –Publishers Weekly

"A masterclass in marshalling a vast canon of research into a riveting, pacy page-turner." --Alison Weir

"One of the most important books to be written about the Tudors in a generation." --Tracy Borman, author of The Private Lives of the Tudors

“The disconnection between romance and realpolitik is brutally and entertainingly illuminated by Gristwood.” –The Times (UK)