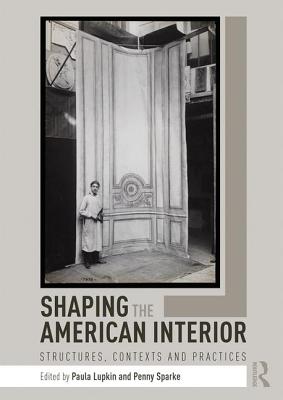 Bringing together 12 original essays, Shaping the American Interior maps out, for the first time, the development and definition of the field of interiors in the United States in the period from 1870 until 1960. Its interdisciplinary approach encompasses a broad range of people, contexts, and practices, revealing the design of the interior as a collaborative modern enterprise comprising art, design, manufacture, commerce, and identity construction. Rooted in the expansion of mass production and consumption in the last years of the nineteenth century, new and diverse structures came to define the field and provide formal and informal contexts for design work. Intertwined with, but distinct from, architecture and merchandising, interiors encompassed a broad and diffuse range of individuals, institutions, and organizations engaged in the definition of identity, the development of expertise, and the promotion of consumption. This volume broadly investigates the fluid pre-history of the American profession of interior design, charting attempts to commoditize taste, shape modern conceptions of gender and professionalism, define expertise and authority through principles and standards, marry art with industry and commerce, and shape mass culture in the United States.

Paula Lupkin is a historian of design, architecture, and cities. Her interdisciplinary work focuses on the spatial production of modernity under capitalism, investigating its impact on the designed world and the built environment. Her research and publications, including her first book, Manhood Factories: YMCA Architecture and the Making of Modern Urban Culture (University of Minnesota Press, 2010), address the ways that architecture, interiors, cities, and landscapes shaped and were shaped by new ways of living, working, designing, and consuming. Her work has been supported by the Charles Warren Center at Harvard, the Graham Foundation for Advanced Study in the Fine Arts, and the Clements Center for Southwestern Studies at Southern Methodist University. Penny Sparke is Professor of Design History at Kingston University, London. She studied French Literature at the University of Sussex from 1967 to 1971 and was awarded her PhD in Design History from Brighton Polytechnic in 1975. She taught Design History at Brighton Polytechnic (1975-1982) and the Royal College of Art (1982-1999). She has given keynote addresses, curated exhibitions, and broadcast and published widely. Her publications include Italian Design from 1860 to the Present (1989); The Plastics Age (1990); As Long as It's Pink: The Sexual Politics of Taste (1995); An Introduction to Design and Culture, 1900 to the Present (3rd edition, 2004); Elsie de Wolfe: The Birth of Modern Interior Decoration (2005); and The Modern Interior (2008).